10 Amazing Things to Do in Marrakech 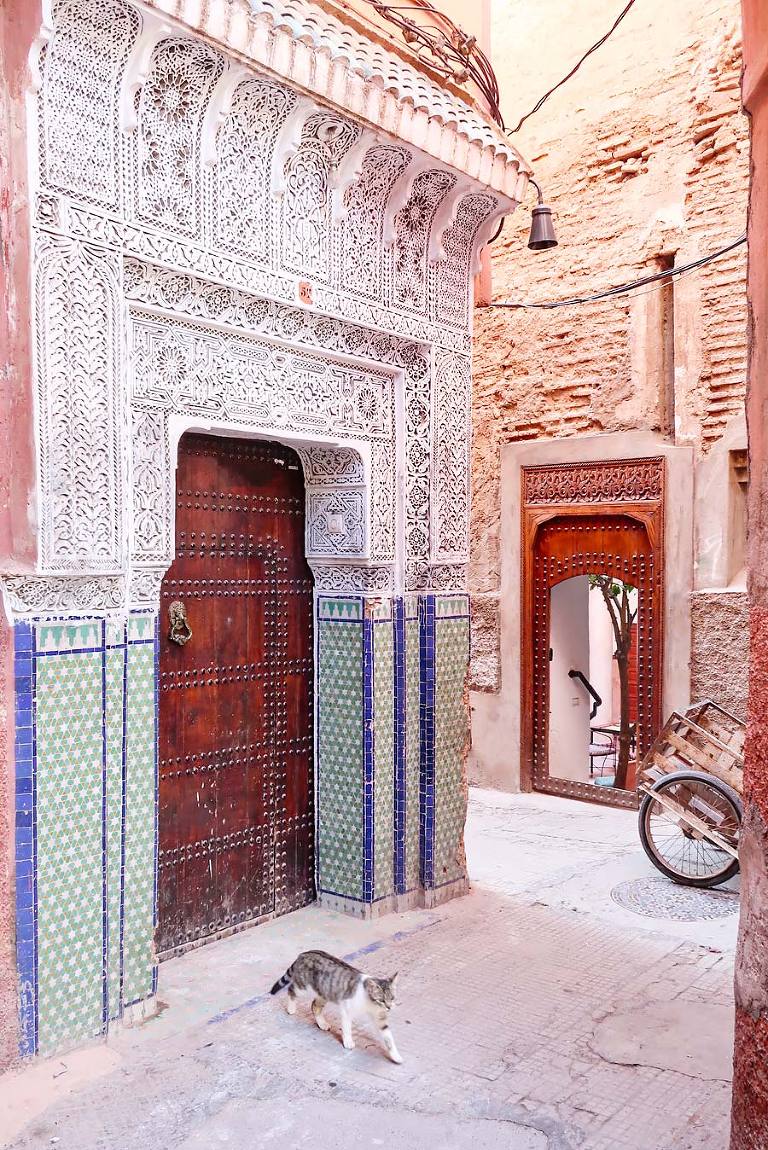 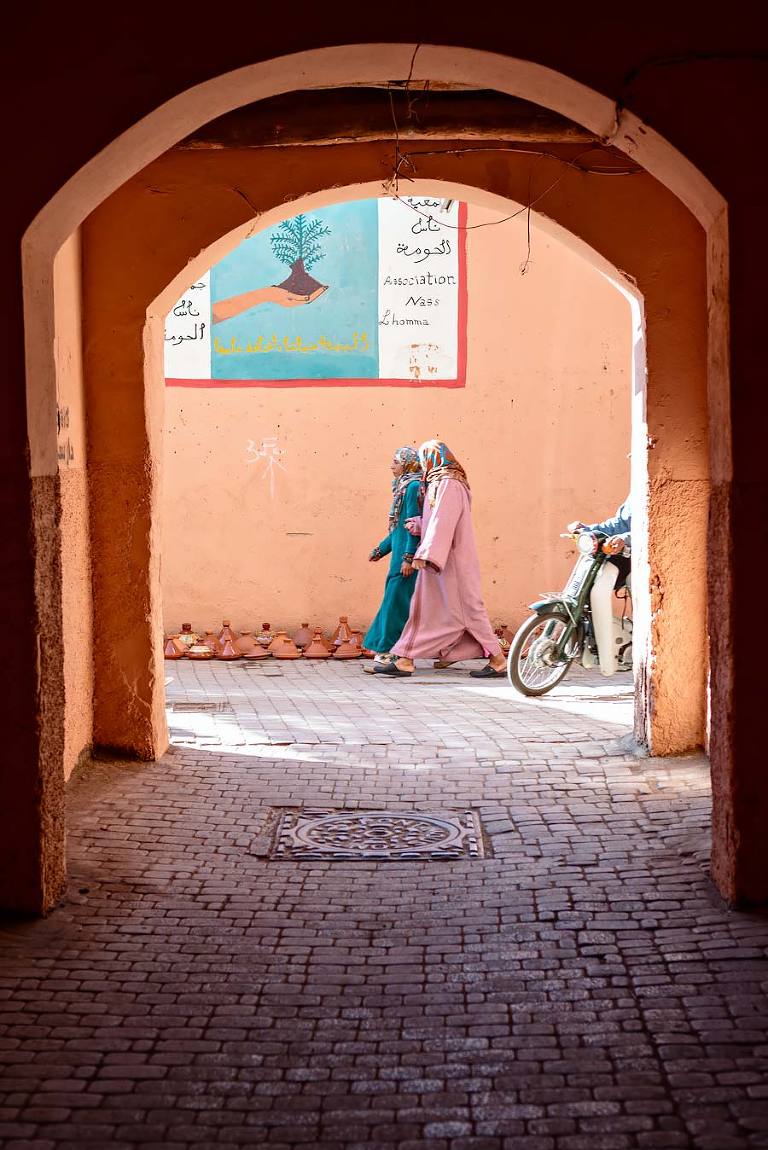 My taxi driver is singing softly while we’re trying to beat the Marrakech evening rush hour traffic. As we’re passing the different city walls into the Medina (old city), the city is getting more lively. I hear the call to prayer in the distance, but it can’t compete with the sound of all the cars and motorcycles.

There are people on the street everywhere. Crowded together for different reasons. To eat, to chat, to repair a motorcycle under the soft orange light of the street lanterns. Some dressed traditionally, others surprisingly modern. 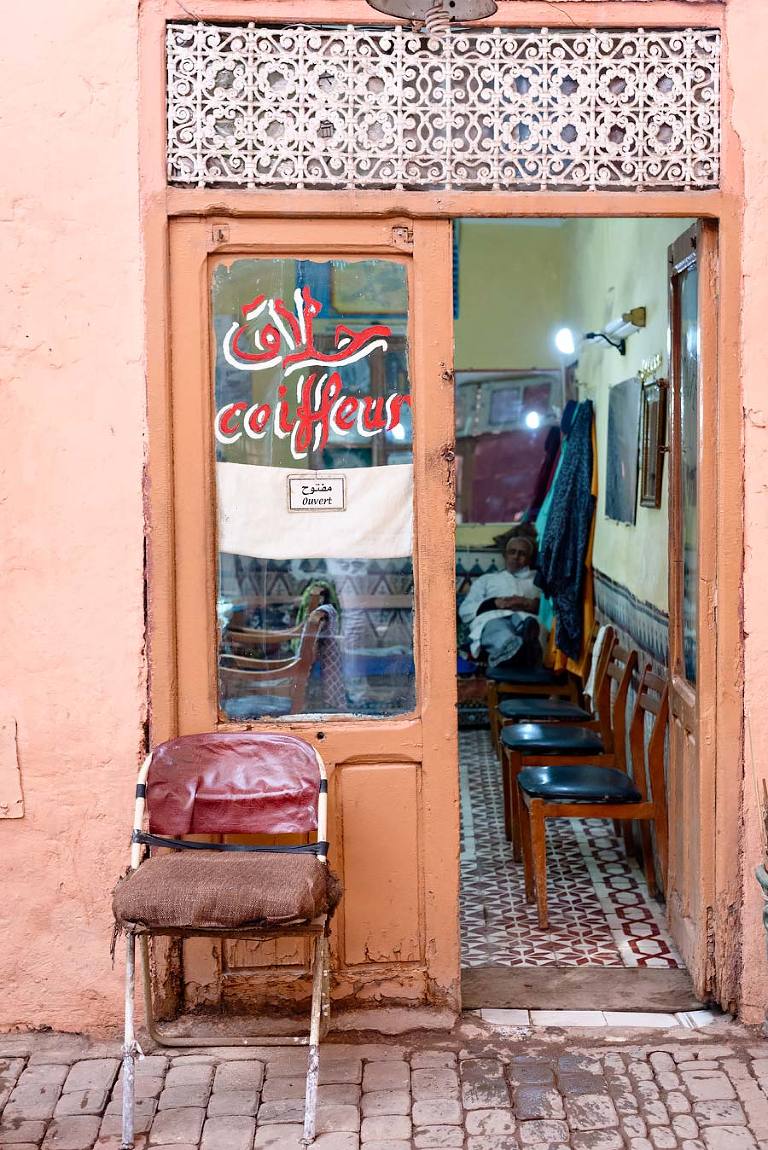 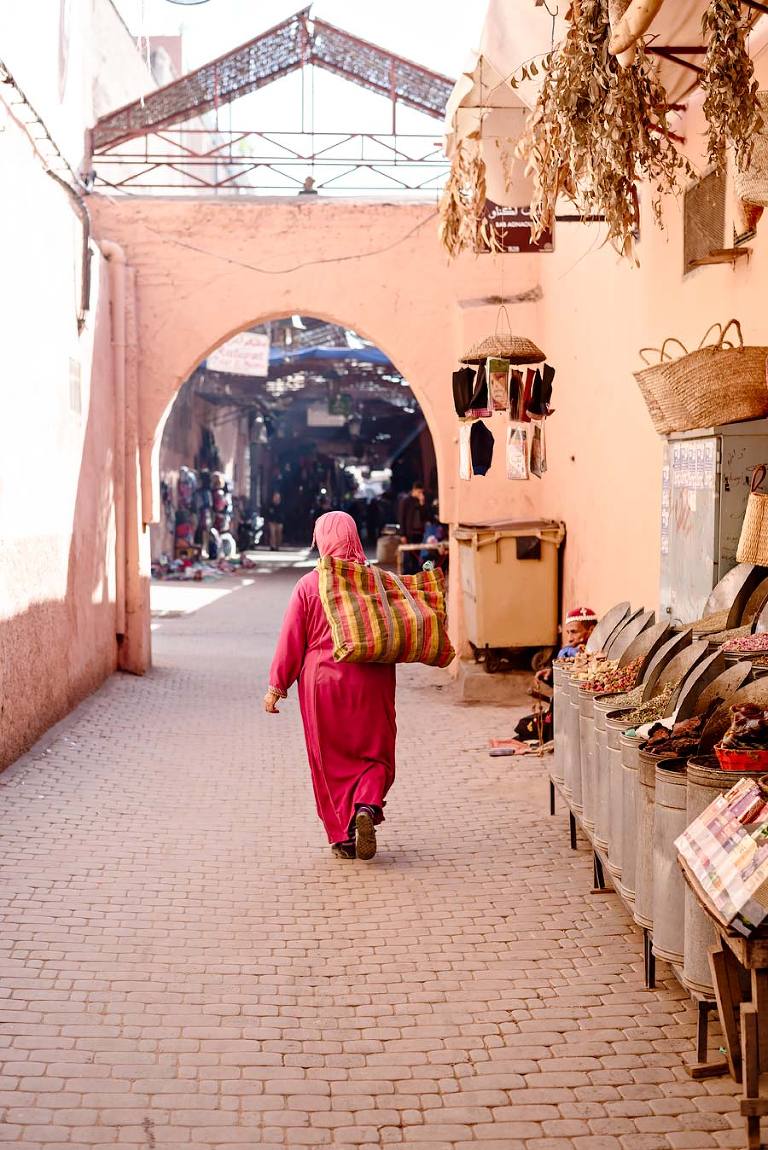 Despite having been here before, I’m getting the same feeling as the first time I arrived in Marrakech five years ago. How amazing to be in a city that’s so completely different and yet still so close to home. The Medina with its narrow alleys that form one big labyrinth feels like a time capsule.

I’m spending three days in Marrakech with Jess. As always we want to get the most out of this trip, but have also accepted that we’re not going to do and see everything. And looking through my photos I think we did a pretty good job.

So if you’re also planning a visit, these are my favourite things to do in Marrakech (including some tips for where to eat). And I’ll end with some general travel tips.

Getting lost in the souks 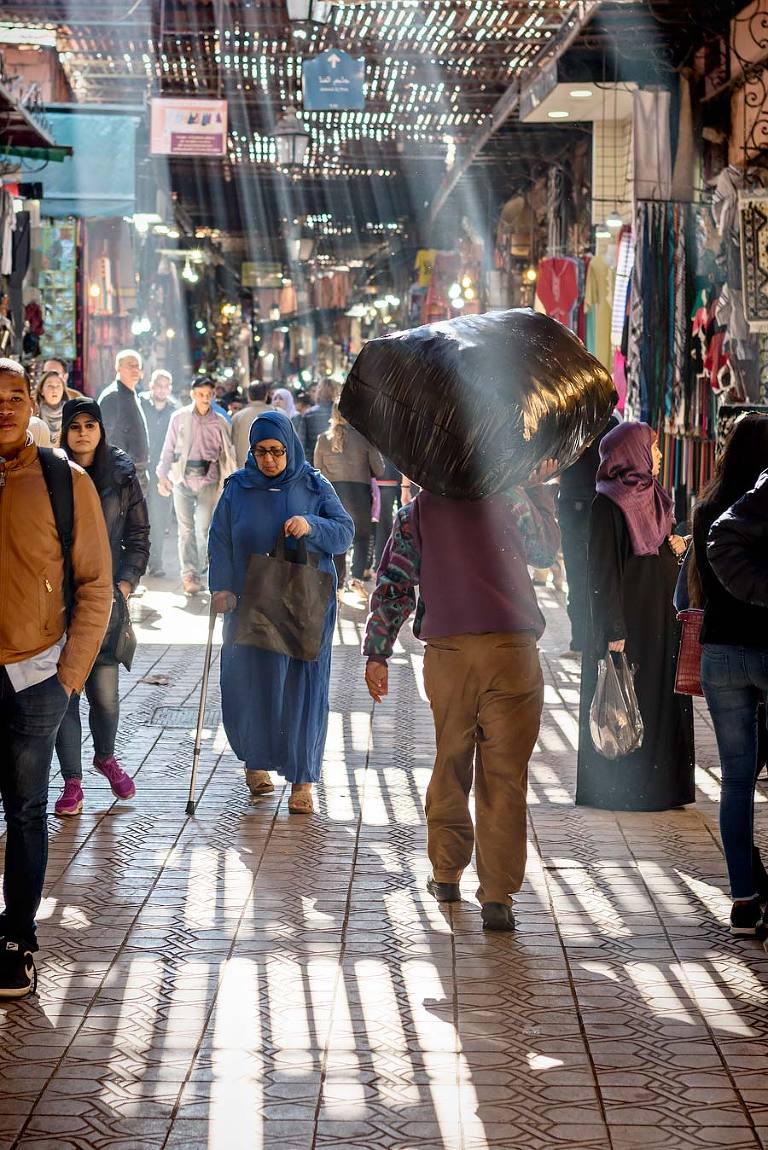 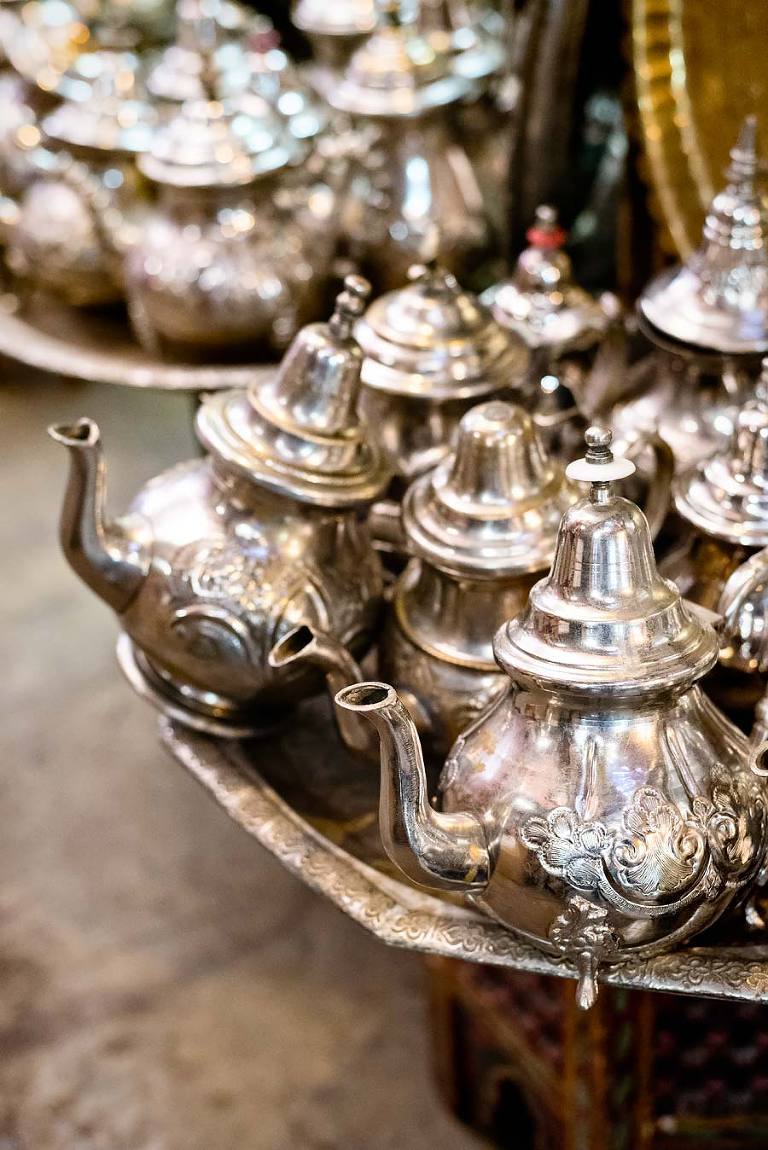 The souks should be your first stop to really get a feel of Marrakech. It feels a bit touristy with the many souvenir shops, but locals shop here as well.

It’s almost impossible not to get lost in the souks. The narrow streets with roofs that filter the sunlight all look alike. And after turning left and right a couple of times, I’d be impressed if you’d still know which direction you’re going. Not to worry, you’ll find your way out eventually. Or follow the signs that point in the direction of Place Djemaa el Fna (the main square).

Learn more from a local with a GPS audio tour 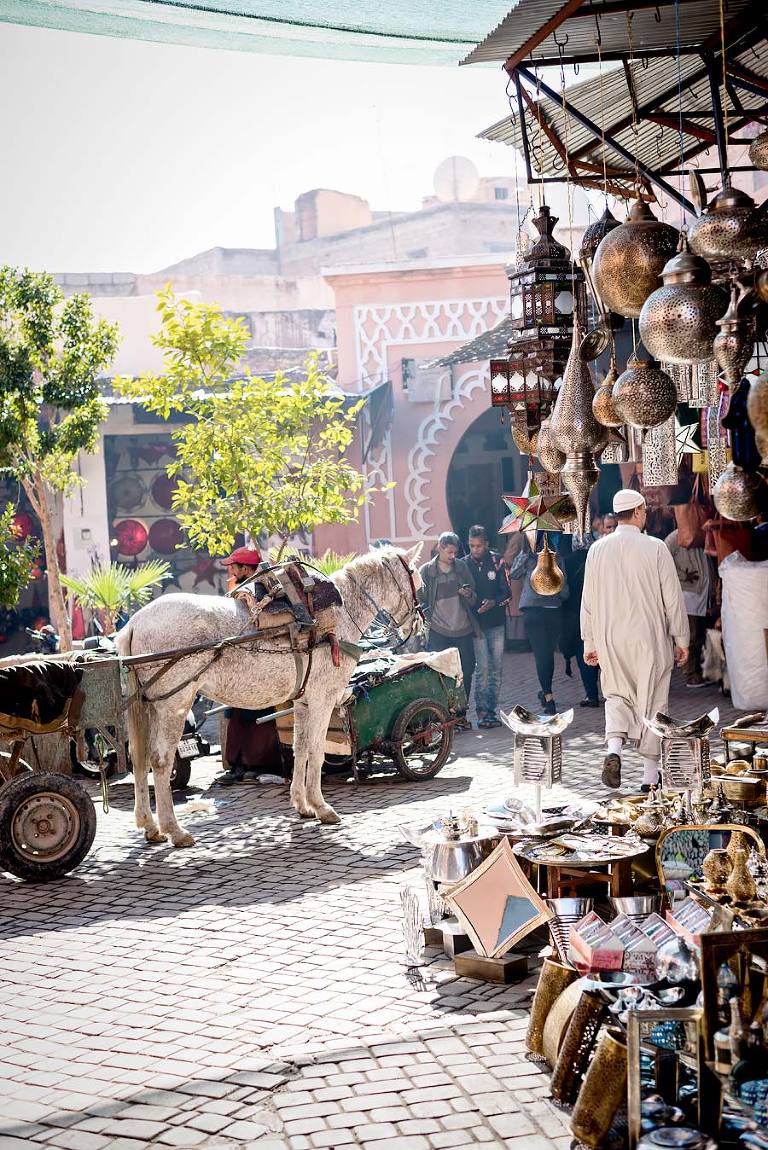 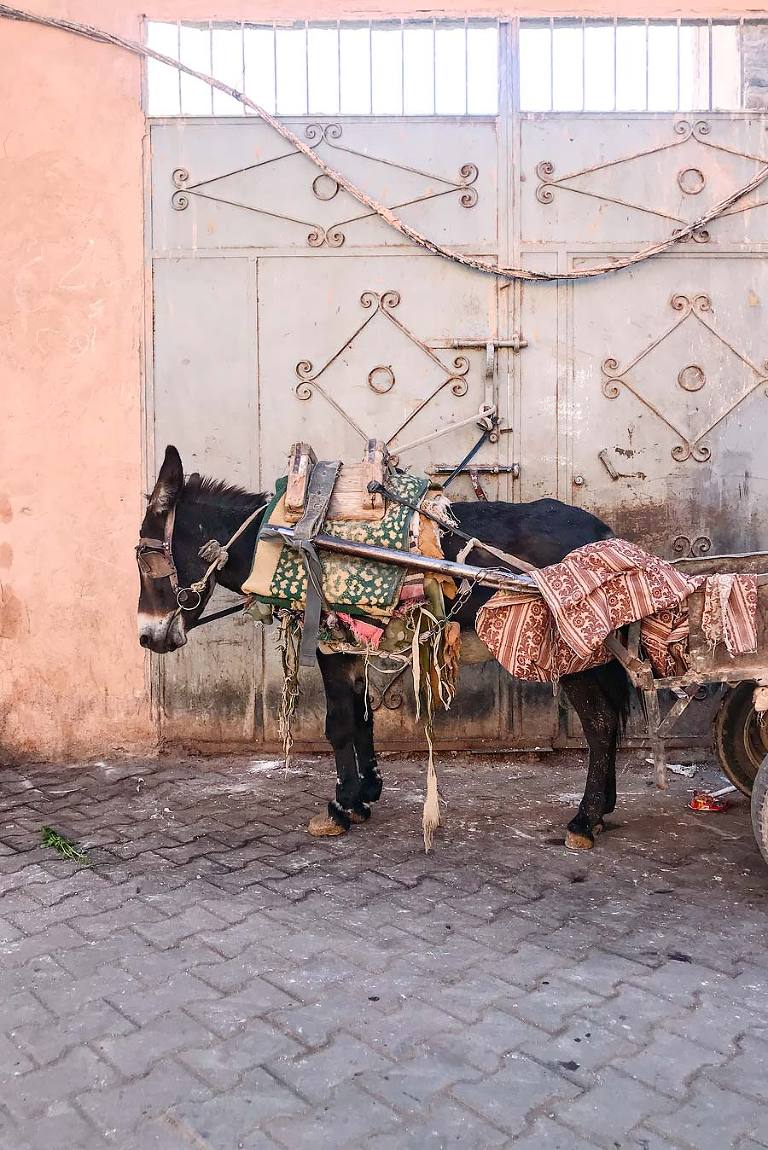 I’m a huge fan of Detour, the app that offers GPS audio walks with locals. The local is not actually with you, but thanks to the GPS on your phone they know exactly where you are and what to say when. A great way to explore a destination and learn things you normally won’t read in a guide book. I’ve done a couple of their walks in San Francisco, and was happy to find out there’s also a tour in Marrakech.

I did this tour by myself after Jess had left to catch her flight back to London, but there’s also a way to sync the tour with the people you’re traveling with so you’re listening to the exact same story. The tours are not free, but worth paying for. 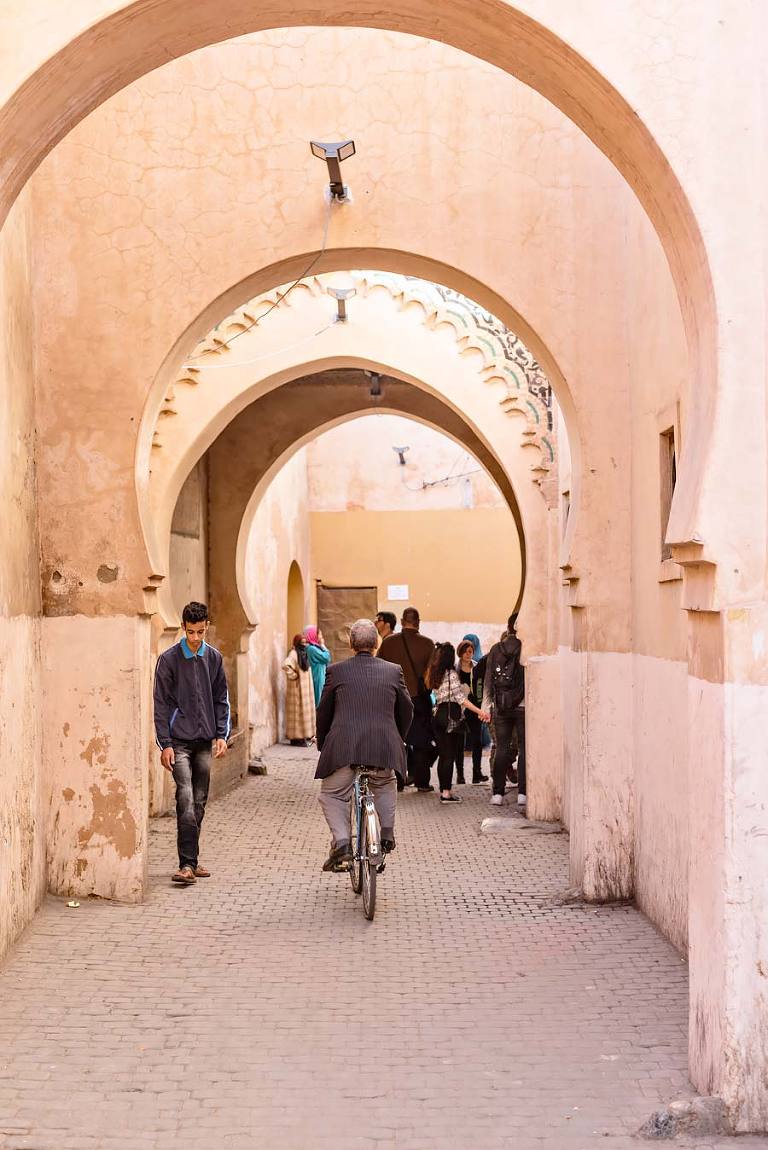 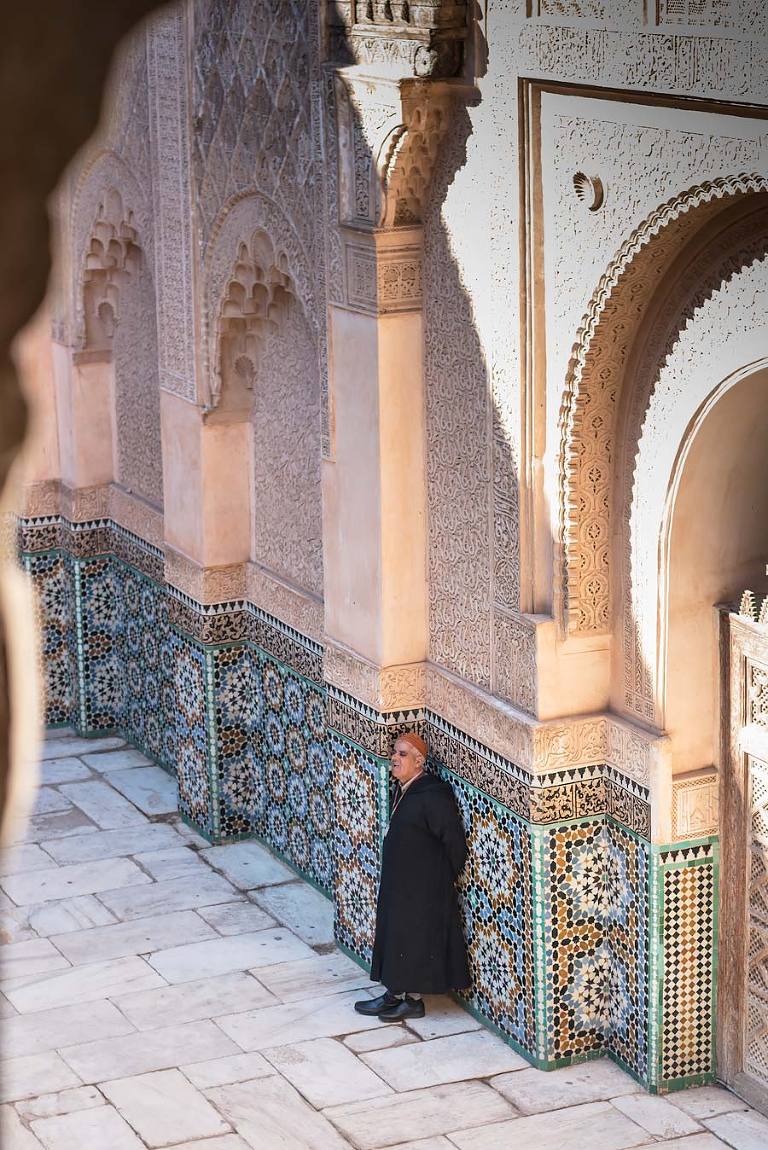 The Medersa Ben Youssef is a place I know I’ll go to every time I’m in Marrakech. It’s just so interesting and impressive. For more than four centuries students lived here to study law and theology. Some of them were lucky to have beautiful rooms, others not so much, but the building itself is gorgeous. 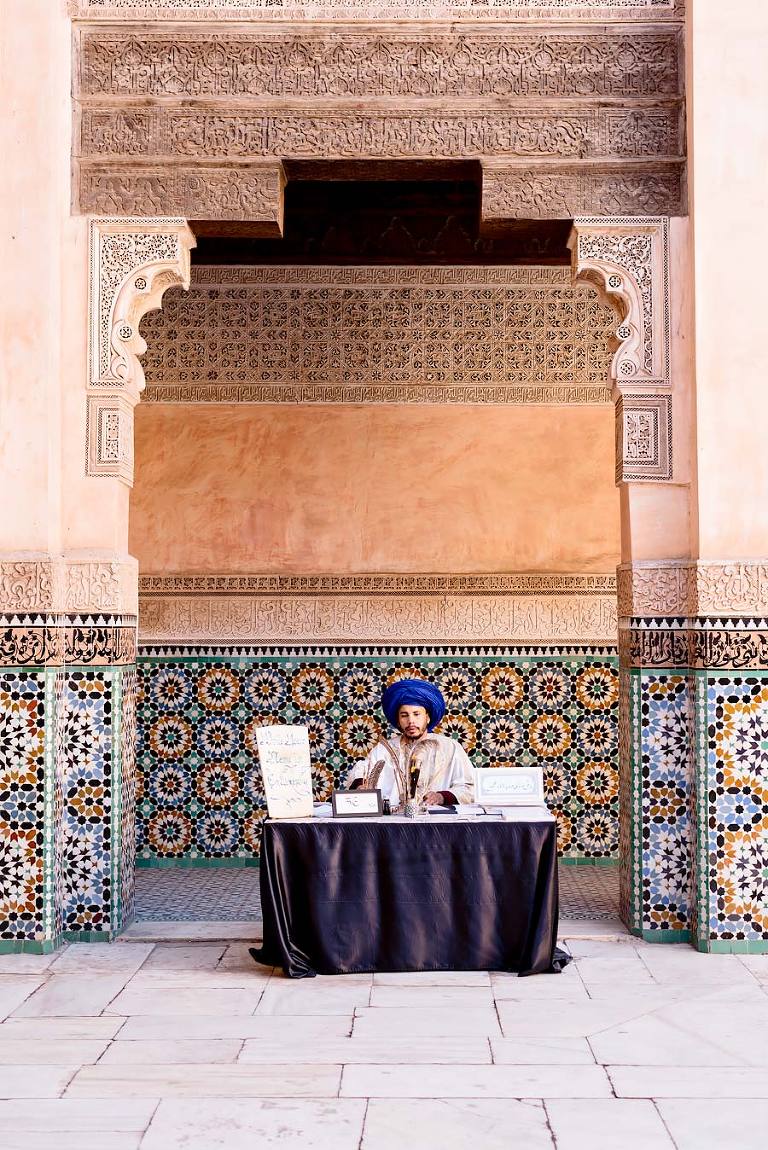 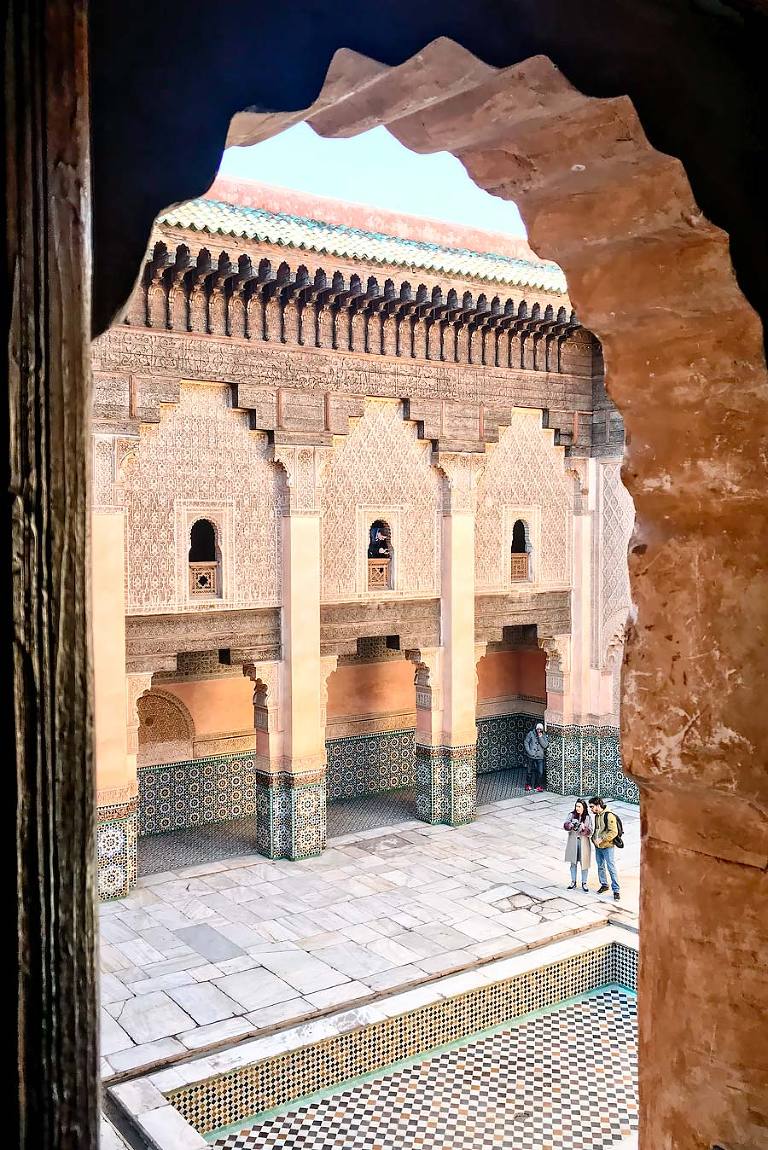 Discover images of the old Morocco at the Museum of Photography 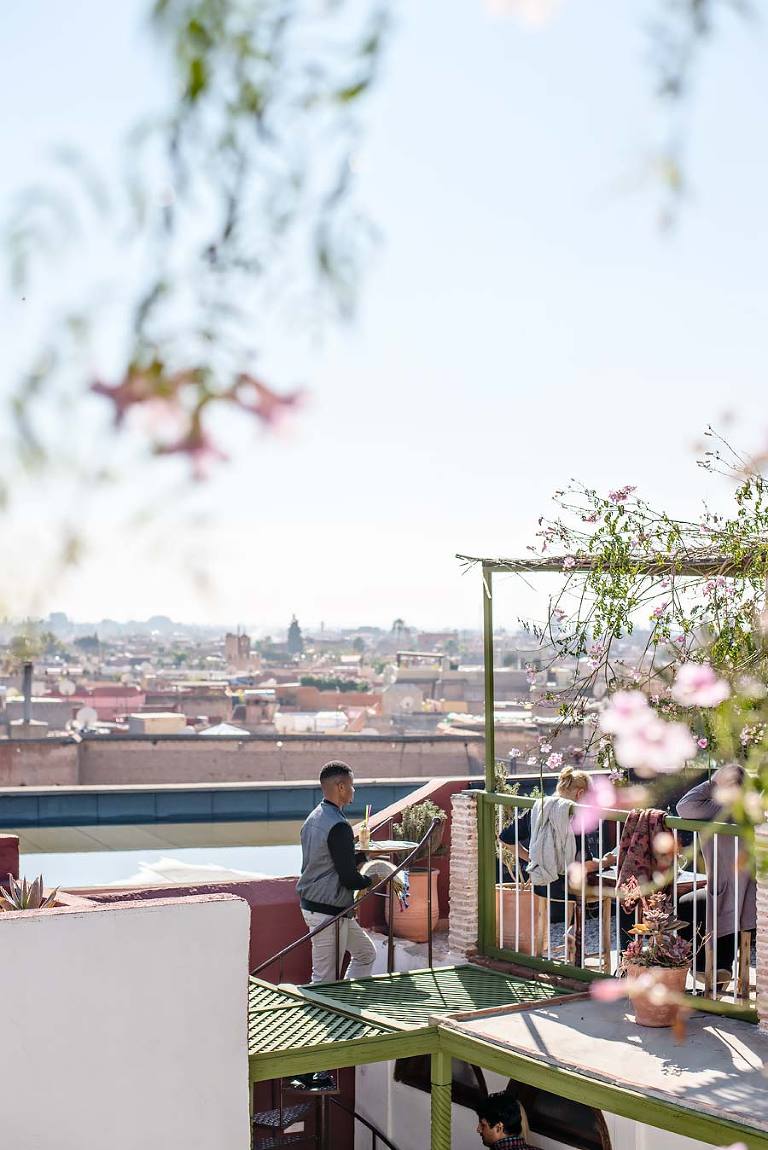 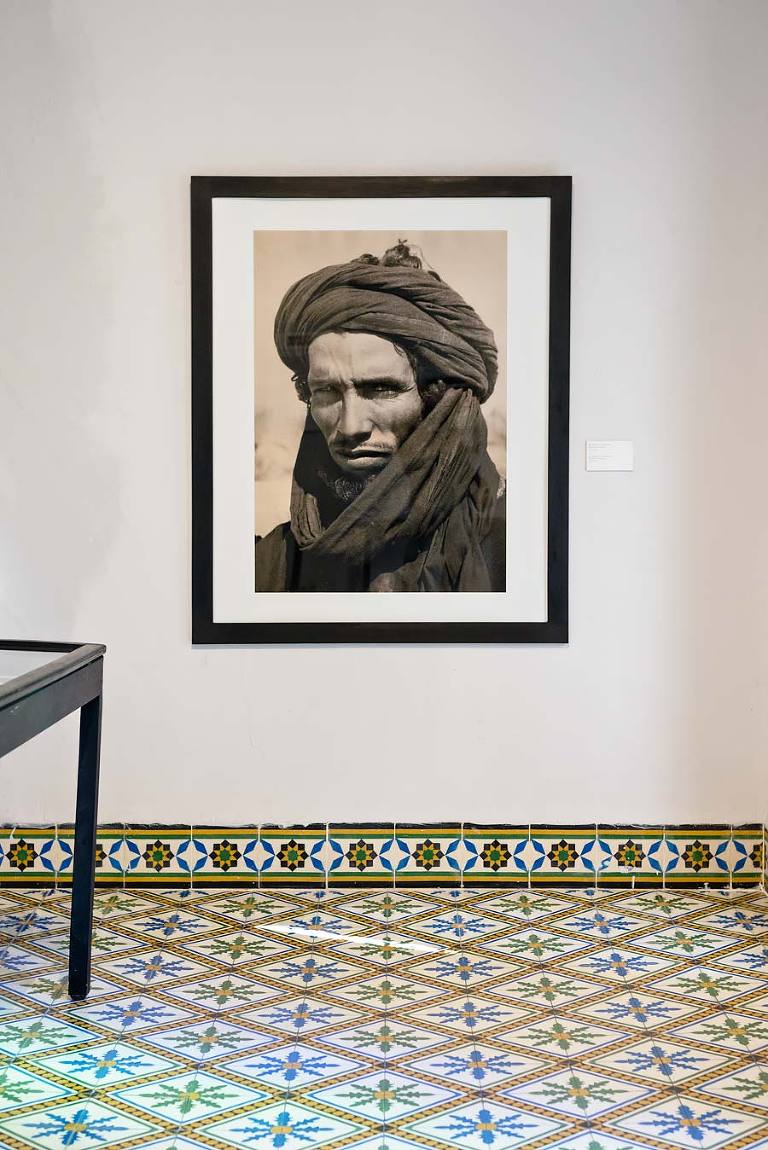 The Museum of Moroccan photography (La Maison de la Photographie de Marrakech) is one of my favourite spots in the city. It’s quite small so you don’t need a lot of time, but it feels like a calm oasis with beautiful photography. And after you’ve seen the collection, don’t forget to go up to their rooftop terrace for a drink with a view.

See how leather is being made at the tanneries 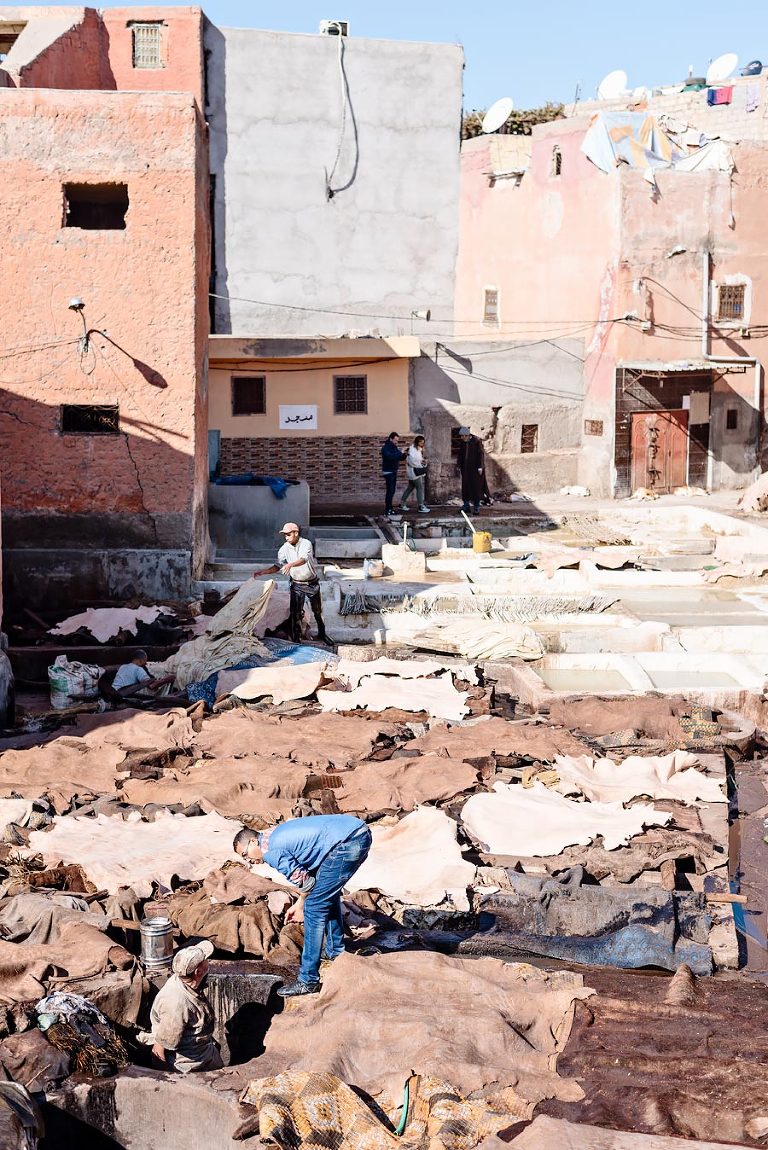 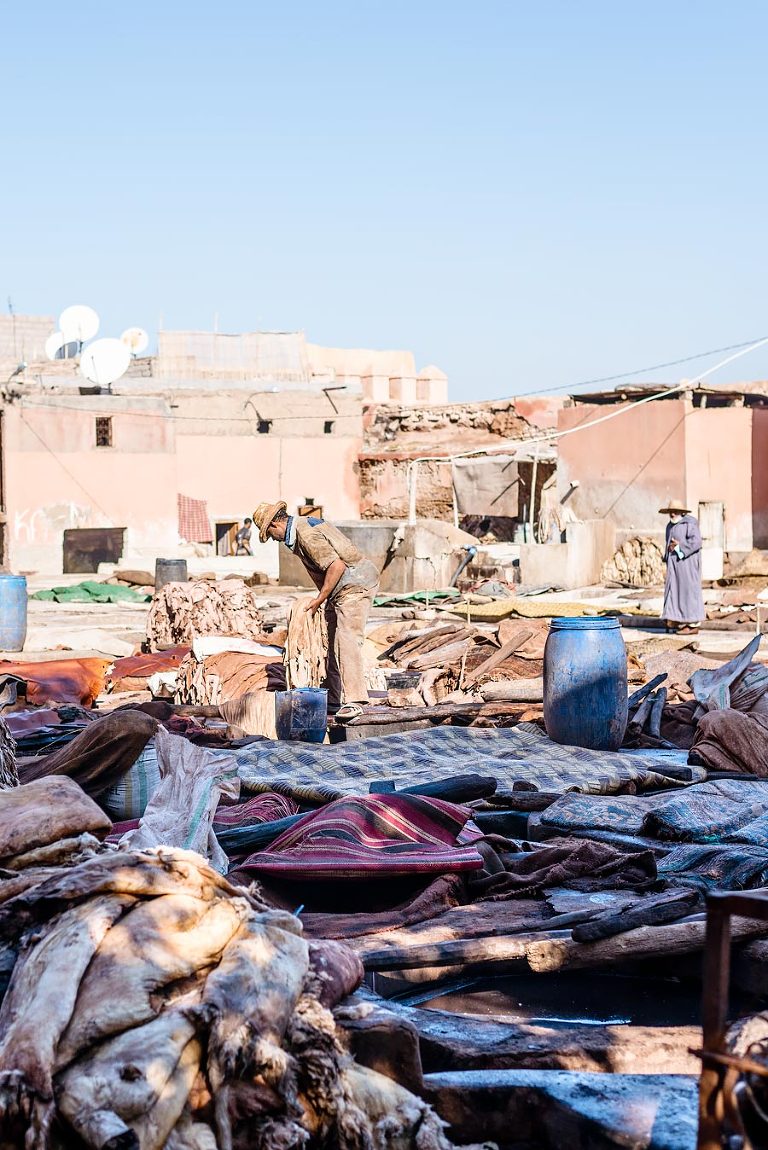 I visited the tanneries for the second time and I have to say that both times were completely different. Five years ago our guide showed and explained to us the different steps of the leather making process. There was time to take photos, ask questions etc. Yes, it’s dirty and the place smells horrible, but based on that experience I would say it’s worth a visit.

This time however, our ‘guide’ rushed us through it, pointed to things but didn’t explain what we were looking at, and when he said a few words it was in a language that was neither English, French or Arabic (probably a mix that was impossible to understand). Plus at the end of this very short visit he wanted €20. Even though guide books suggest to pay something between €1-€2 per person. Of course we didn’t pay him what he was asking for, but he acted very insulted and the whole thing felt very wrong.

So my advice would be to look into finding an official guide before you go instead of just going to the tanneries by yourself. Also, if you’re hoping to see the dying process with bright colors, this only happens at a specific time of year.

Visit the different palaces in Marrakech 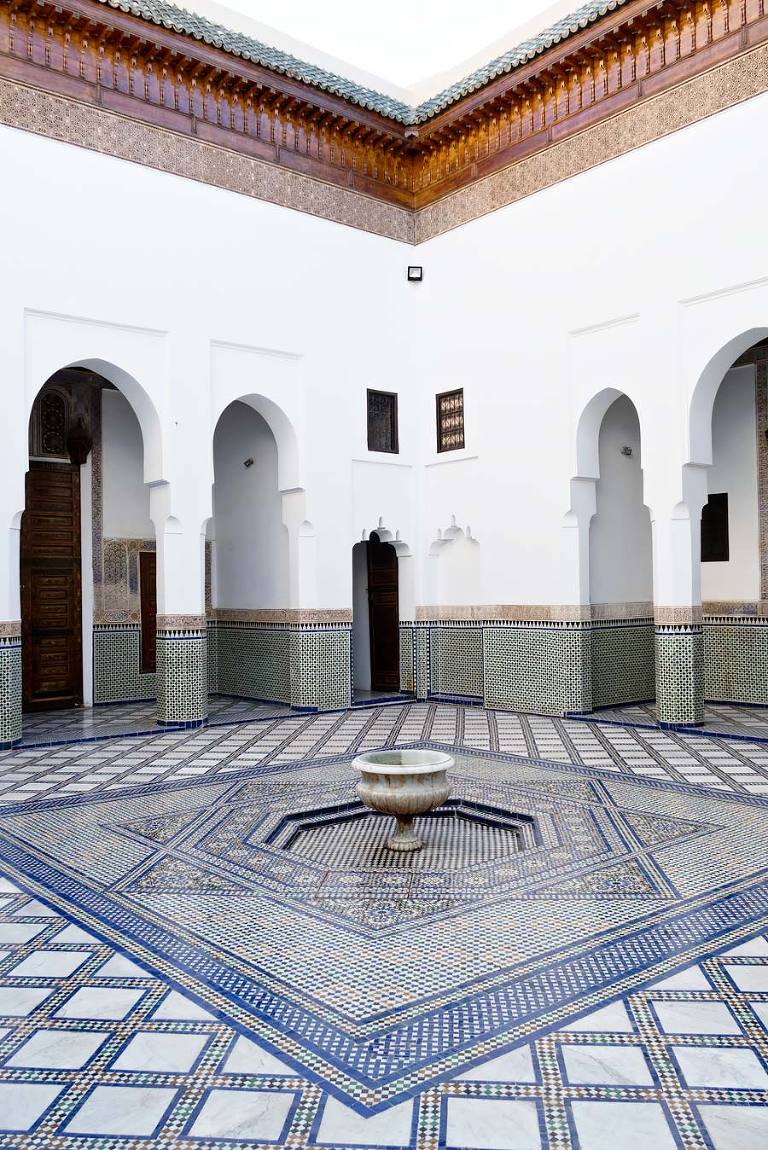 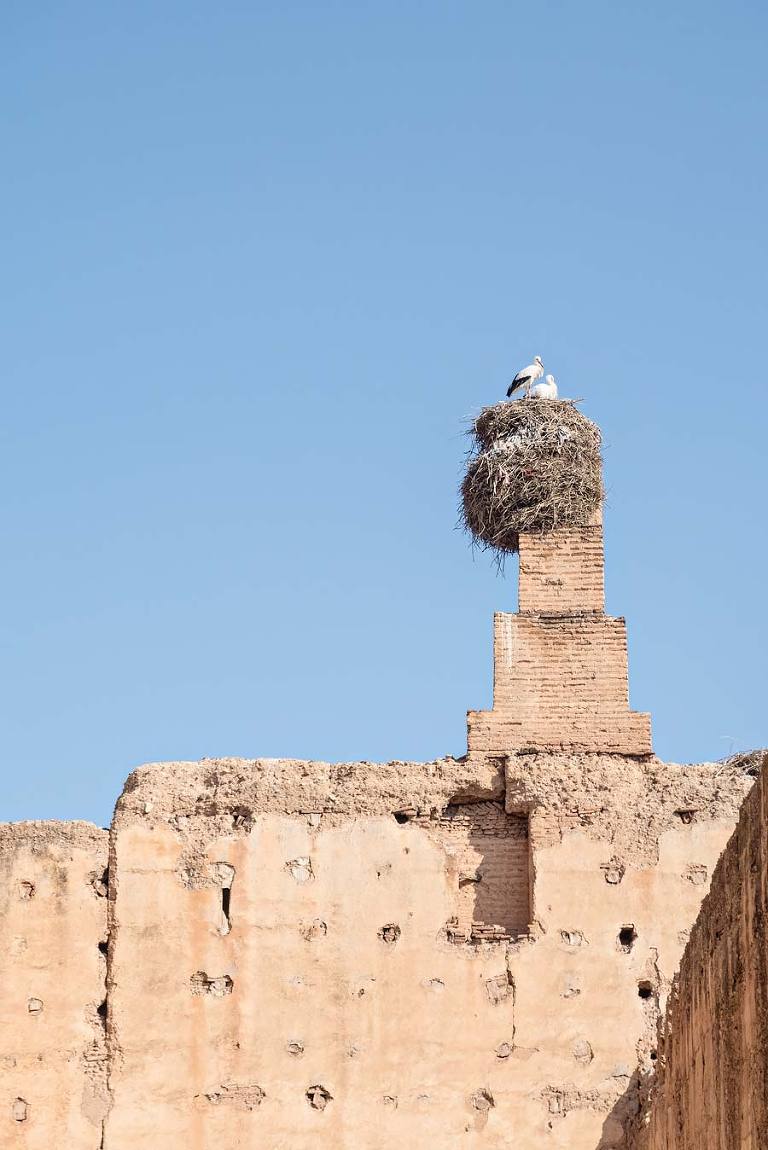 There are several palaces you can visit in Marrakech, one more beautiful and extravagant than the other. Unfortunately the rooms that you can visit are empty so you’re not learning anything about how the royals were actually living here, but still the buildings are beautiful and worth a visit.

Bahia Palace (Palais de la Bahia) with 160 rooms is one of my favourites. This is also where the king stays when he’s in Marrakech. And the 16th century El Badi Palace (Palais El Badiî) is really interesting, despite being mostly ruins today.

Form your own opinion about Jardin Majorelle 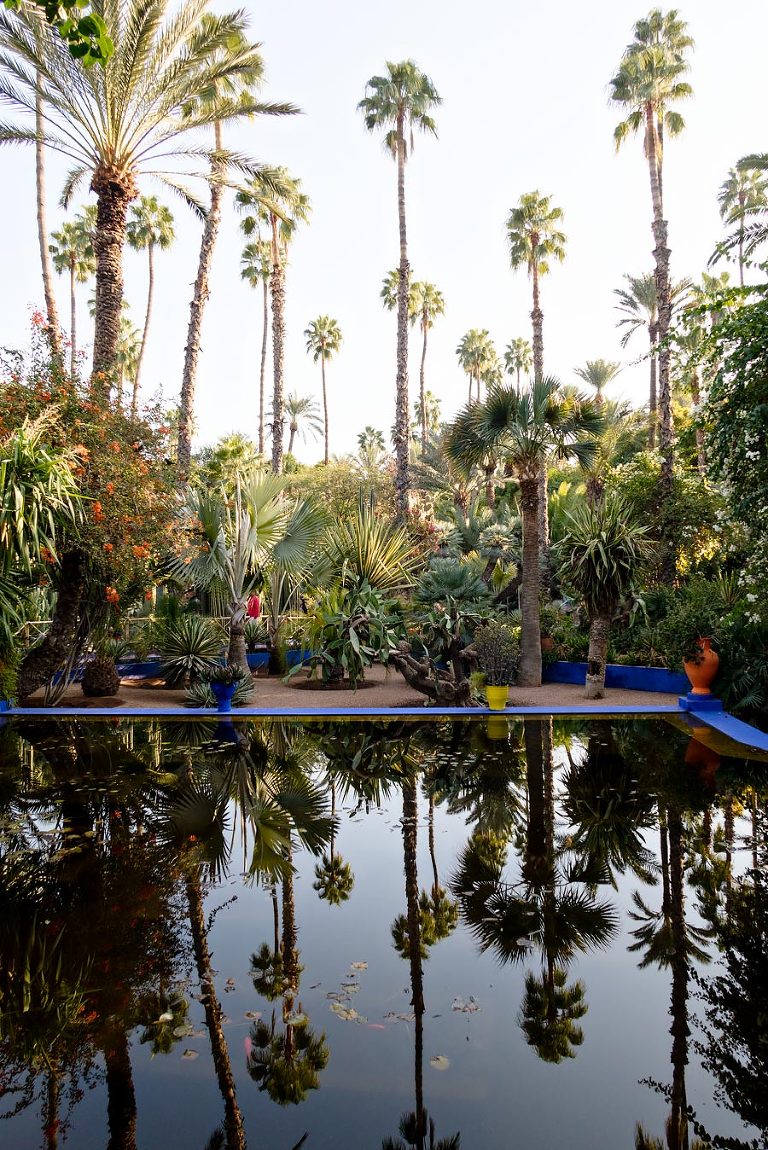 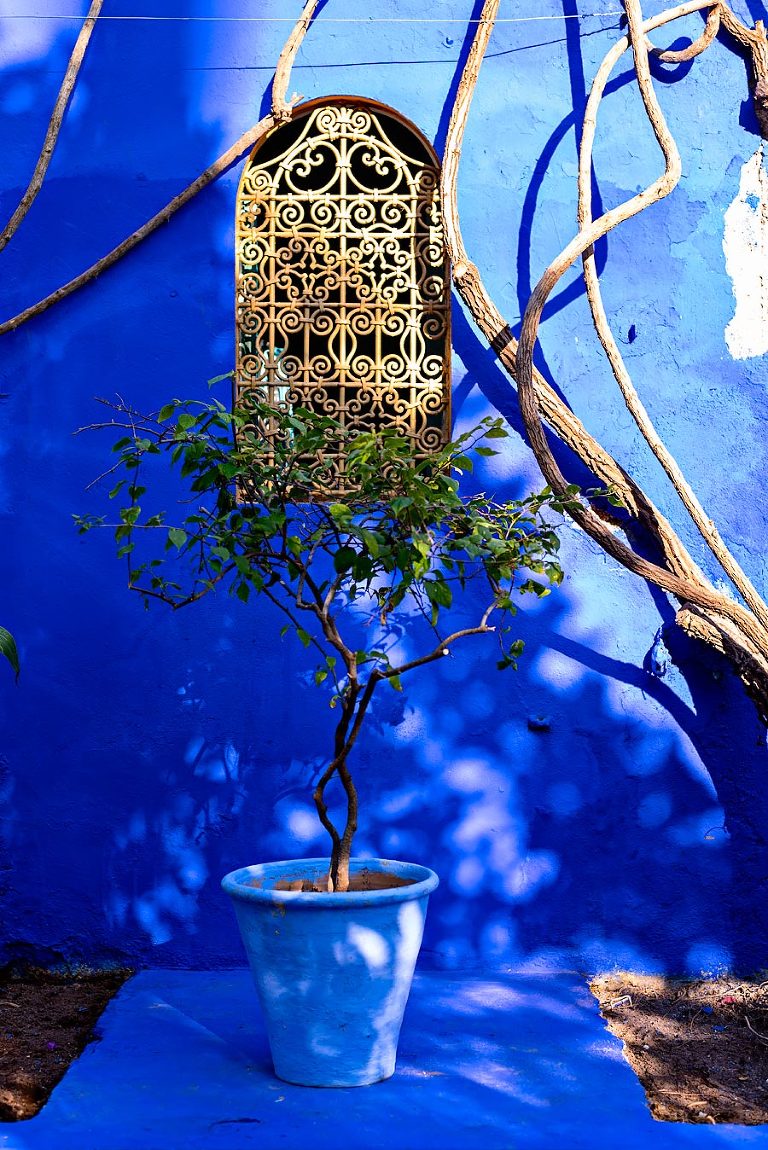 Now you may have been wondering when I was going to mention Jardin Majorelle. After all, when you look at pictures of Marrakech on Instagram you’d almost think that this garden and some luxury hotels are the only things worth visiting.

However, I have mixed feelings about this place. It’s a beautiful, well-designed garden with palm trees and a large variety of cactuses. But it takes some time to get there (it’s in the ‘new city’) with nothing else to do or see in that neighborhood. Plus when you’re there, it’s difficult not to get frustrated by the many girls posing in front of that majorelle blue house. It has nothing to do with the garden, it’s all about a nice bright colored background for a selfie.

So decide for yourself if you want to go. Especially if you have enough time, I would recommend going but try to avoid the Instagramming crowds.

Have lunch in a beautiful hidden garden 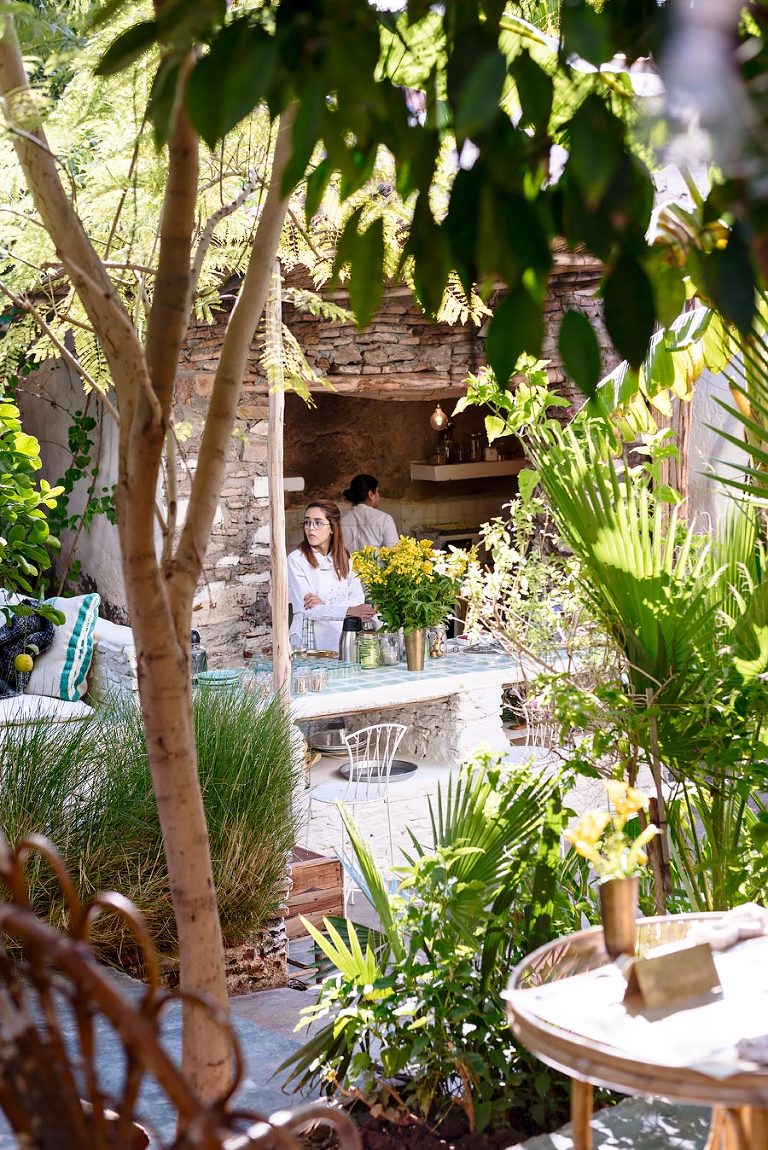 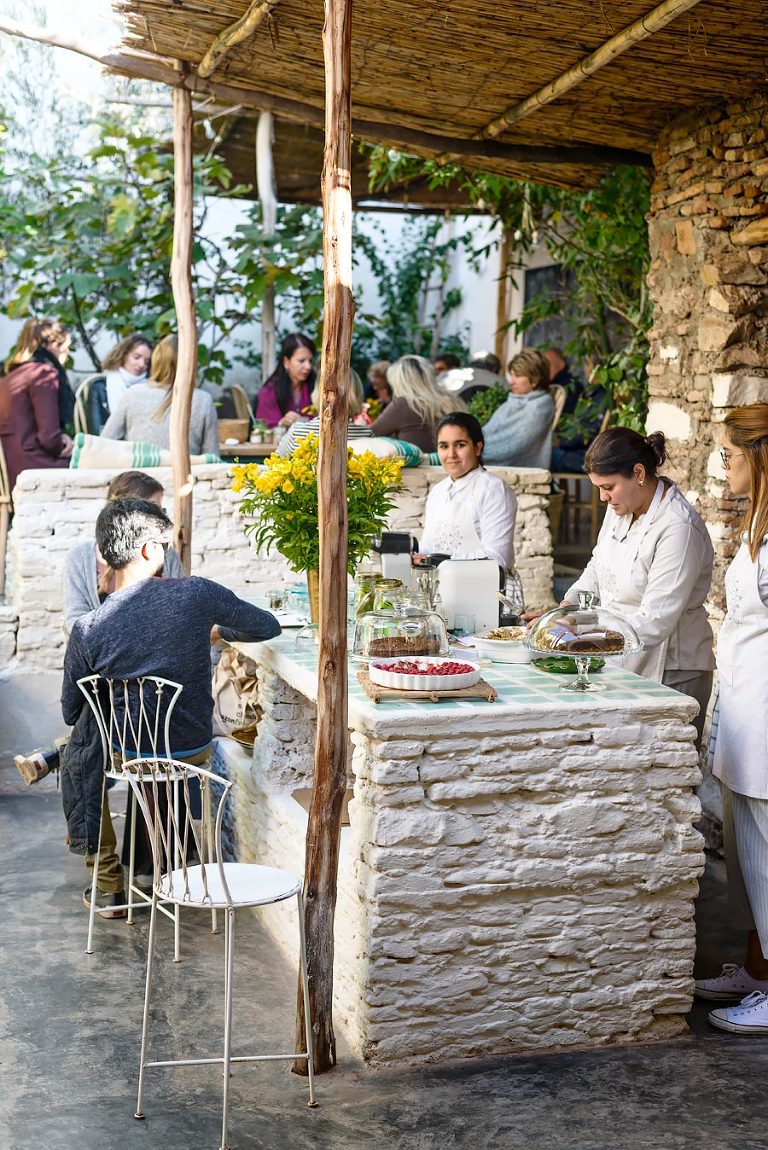 I had never heard of restaurant La Famille, which is why I’m so happy we accidentally found it. Because this is a place in the Medina you definitely don’t want to miss when you’re in Marrakech.

It’s charming with tables under the trees, the food is perfect with a daily changing vegetarian, mediterranean menu. And then they also have a shop where I wanted to buy everything. They’re open every day between noon and 4.30pm, except on Monday.

Another nice and ‘green’ (with garden) lunch place is Le Jardin.

It’s impossible to miss Djemaa El Fna when you’re in Marrakech. The main square is also interesting during the day, but with all the snake charmers and monkeys I actually try to avoid it.

At night it’s completely different. The monkeys and snakes are gone and have been replaced by food stalls. We didn’t eat here, so I can’t say anything about the food. But it’s really fun just to wander around and experience the atmosphere of this night market.

If you’re looking for a good viewpoint to see the square from above, then go to Le Grand Balcon du Café Glacier. There’s nothing interesting about this café and you need to buy a drink if you want to access the balcony, but just do it because the view is worth it. 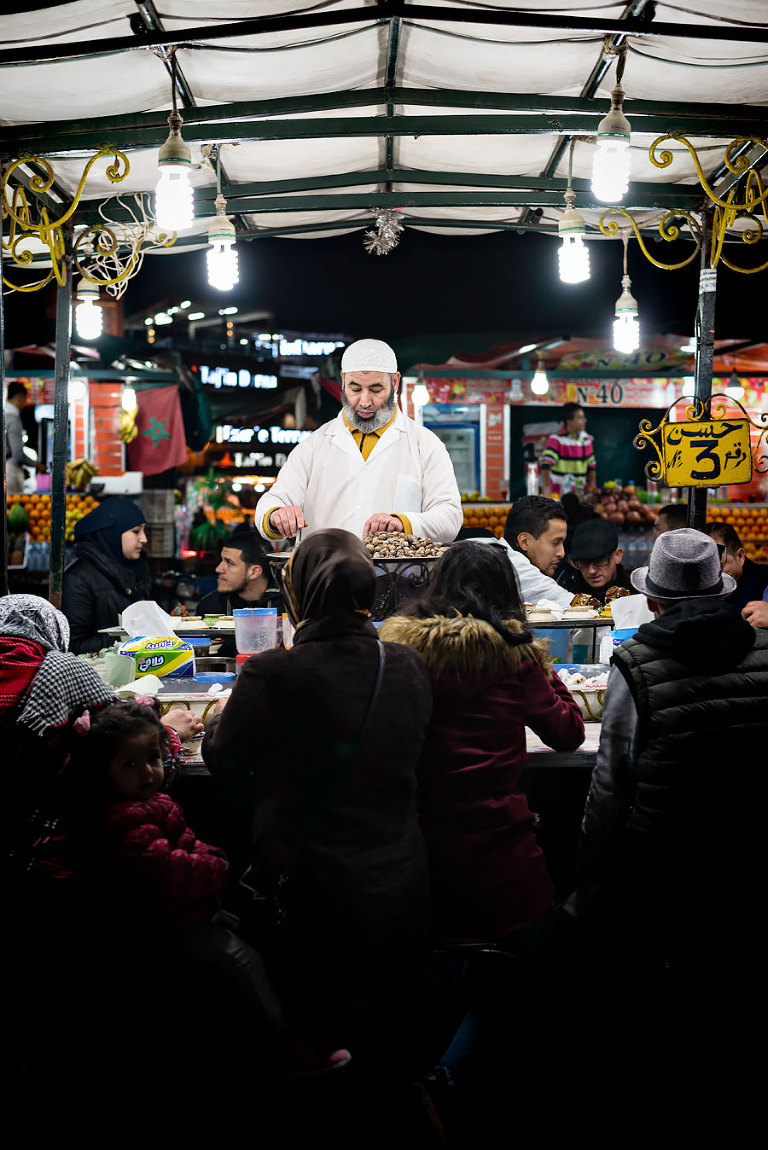 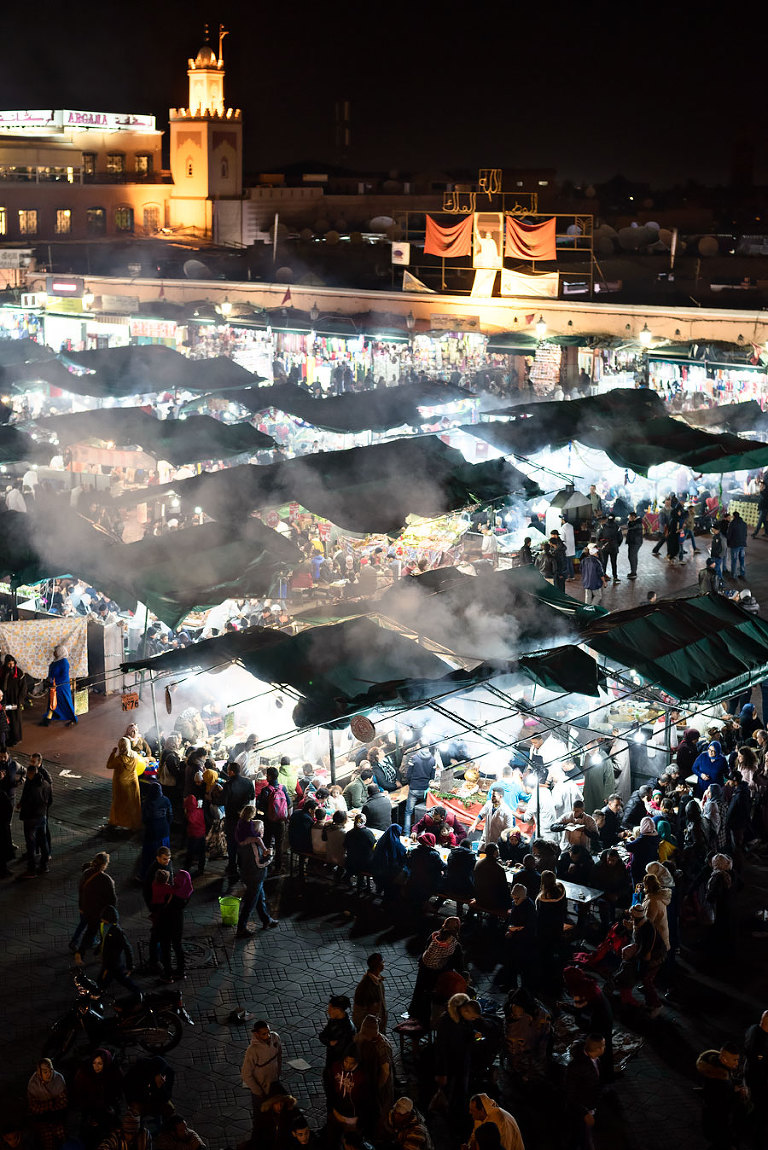 Take a break in a hidden 16th century building 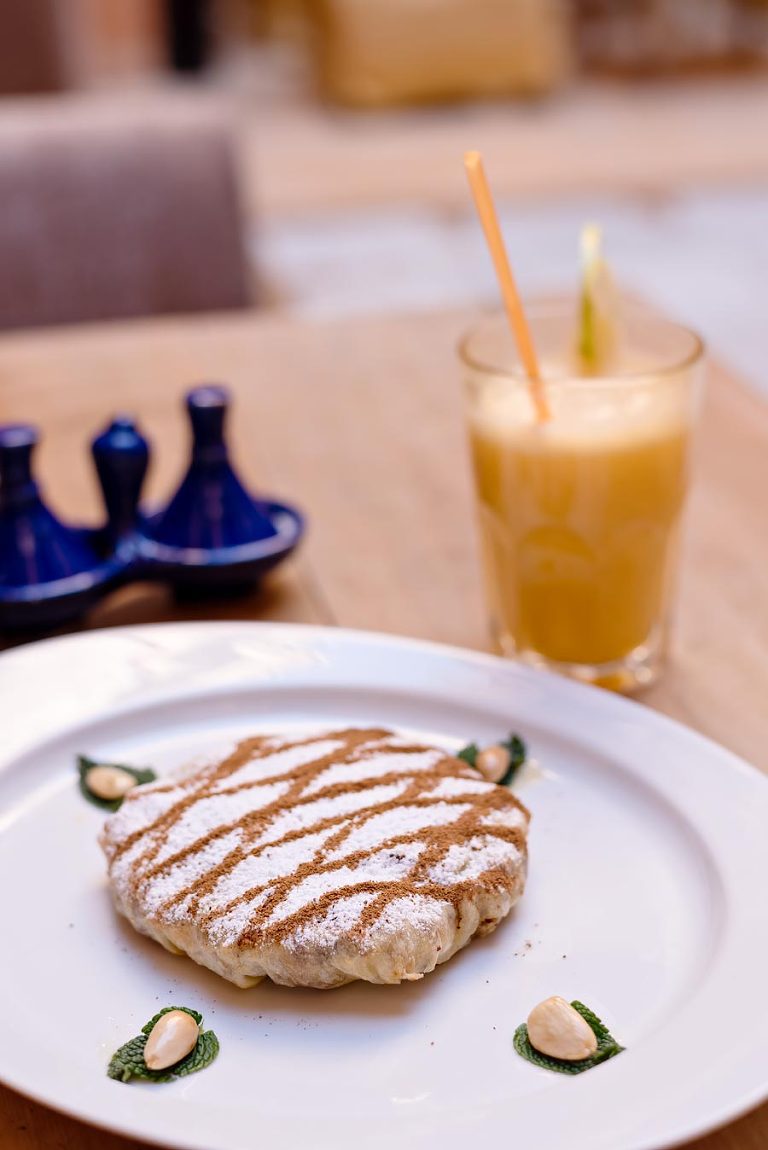 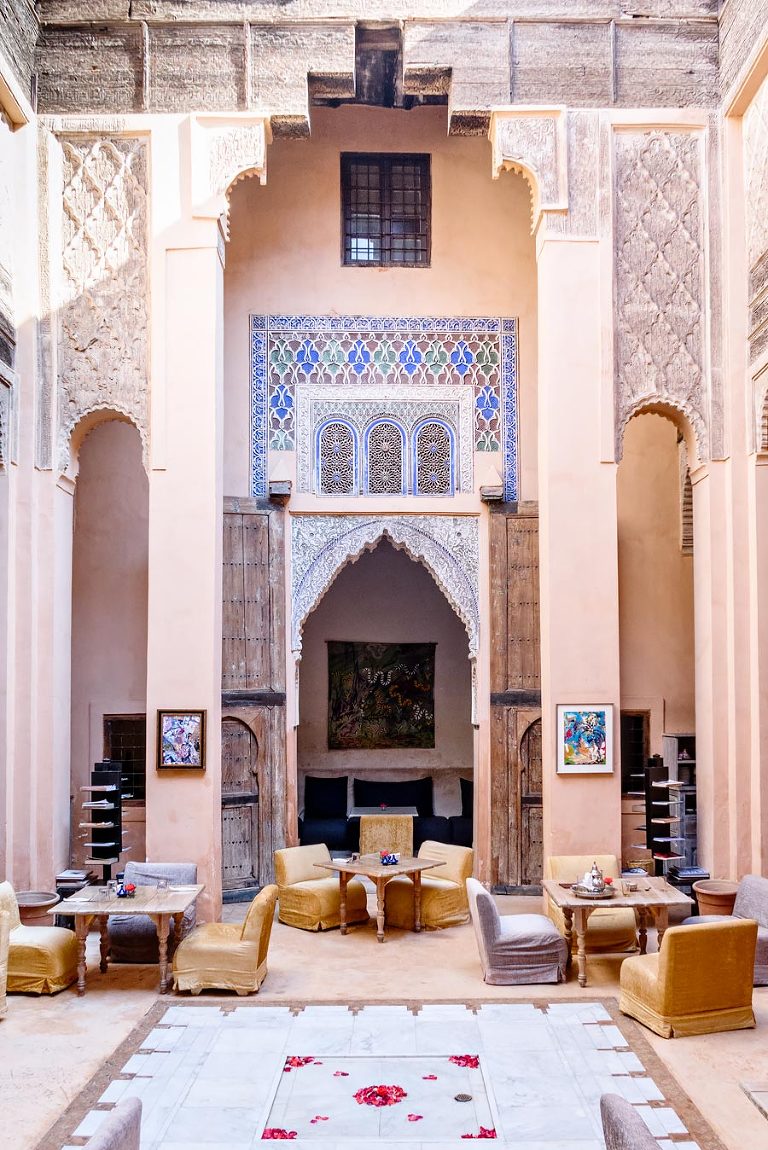 As with most things in Marrakech Dar Cherifa is easy to miss if you don’t know exactly where to look for it. In this case you need to ring a door bell which makes you wonder if you’re actually at the right place. But once a friendly face opens the door and you step inside you know this is what you were looking for.

Dar Cherifa is a literary café / restaurant and the perfect spot for lunch or a nice break with a drink. It’s such a calm and beautiful place. And I finally had a pastilla (a traditional chicken filo pastry pie) here, which is one of my favorite Moroccan dishes.

Even though Marrakech is only a short flight from Europe, it’s very different from most cities you’ve visited before. Which is why I thought I would finish with some general tips that may be useful. 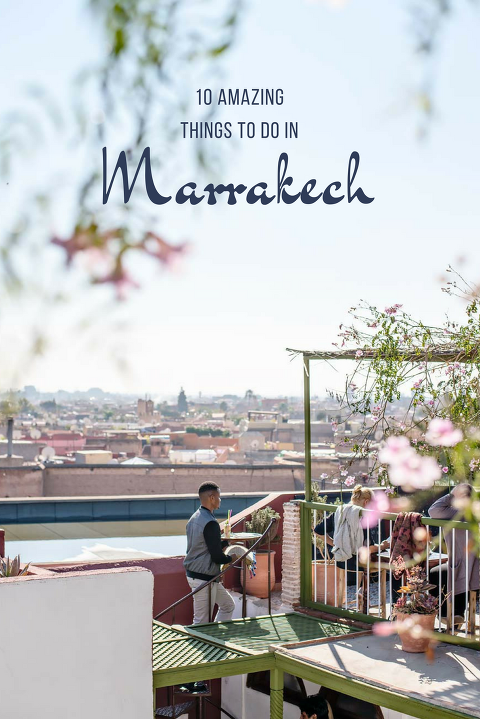 Tags:
« 10 tricks to turn your bedroom into your favourite boutique hotel
Ultimate Guide to My Favorite Places to Go, Eat & Stay in Singapore »