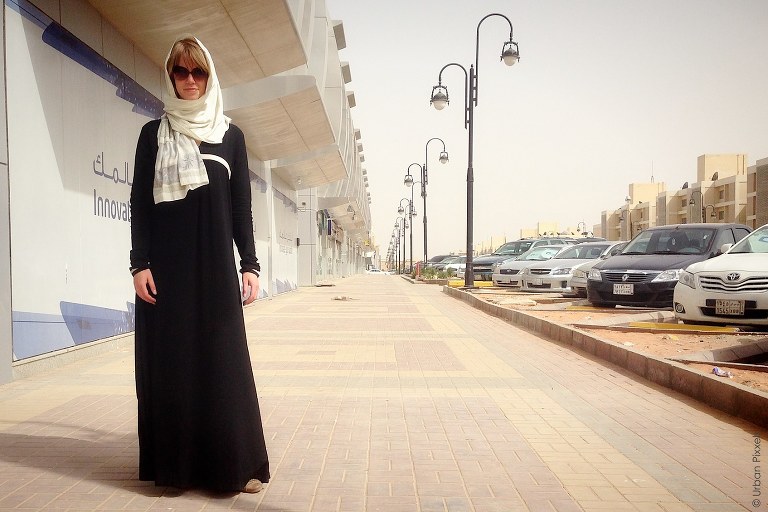 Shopping for an abaya and headscarf in London. Not really how I had pictured my shopping experience when I moved here. But sometimes business trips bring you to unexpected places and for this one I needed some additional clothing.

It’s funny how quickly you get used to seeing people being dressed in only black (all women) and white (most men). Even I actually got used quite easily to wearing the abaya (except that I kept tripping over it and wished they had chosen a different colour in these temperatures). But of course life in Riyadh isn’t only black and white.

The tough part is that there are rules…many rules. Especially for women. Besides having to cover most part of my body, women will get arrested for driving a car (even though there’s no official law that says so), they don’t share an office space with men, restaurants have special entrances and rooms for men-only and families, and even the McDonald’s has a separate section for men and women to take your order. You’re not allowed to sing or dance in public, you can’t drink alcohol and you won’t find a cinema, theatre of bar anywhere in the city.

Having meetings in offices where they usually don’t see any women, I kind of felt like the pink (or better said: tall, blonde) elephant in the room. Nobody said anything about it, but you knew it was a really unusual, and a bit uncomfortable situation for everyone.

But when you look beyond all those rules, you’ll soon discover that people are extremely friendly and hospitable. And their life behind closed doors isn’t so different from ours. They enjoy spending time with their friends and family. Women love fashion and wear the most beautiful designer clothes. Everybody’s on Facebook and Twitter. And even here, people take pictures of their food and post them on Instagram.

They also told me that they sometimes get London weather in Riyadh. It’s how they call those rare days when it’s cloudy and rainy. Having spent a few days in temperatures of over 40 degrees, I must admit that I have started to appreciate my own London weather in London a bit more.