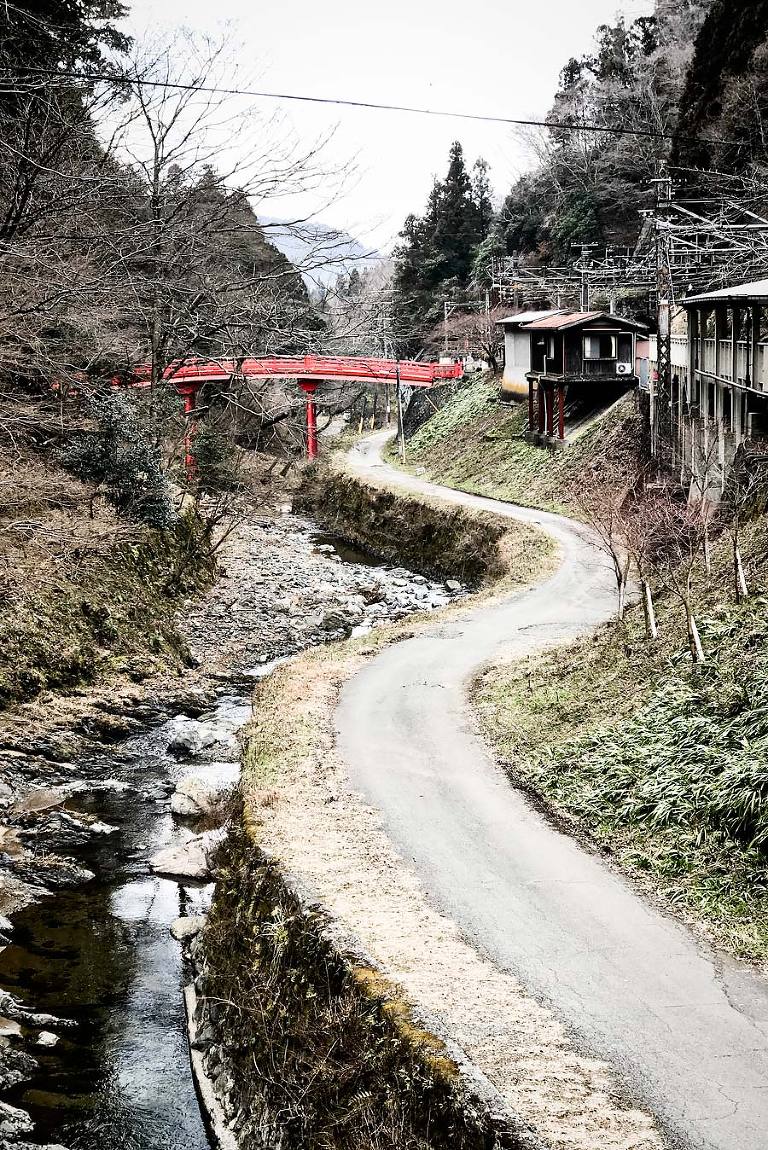 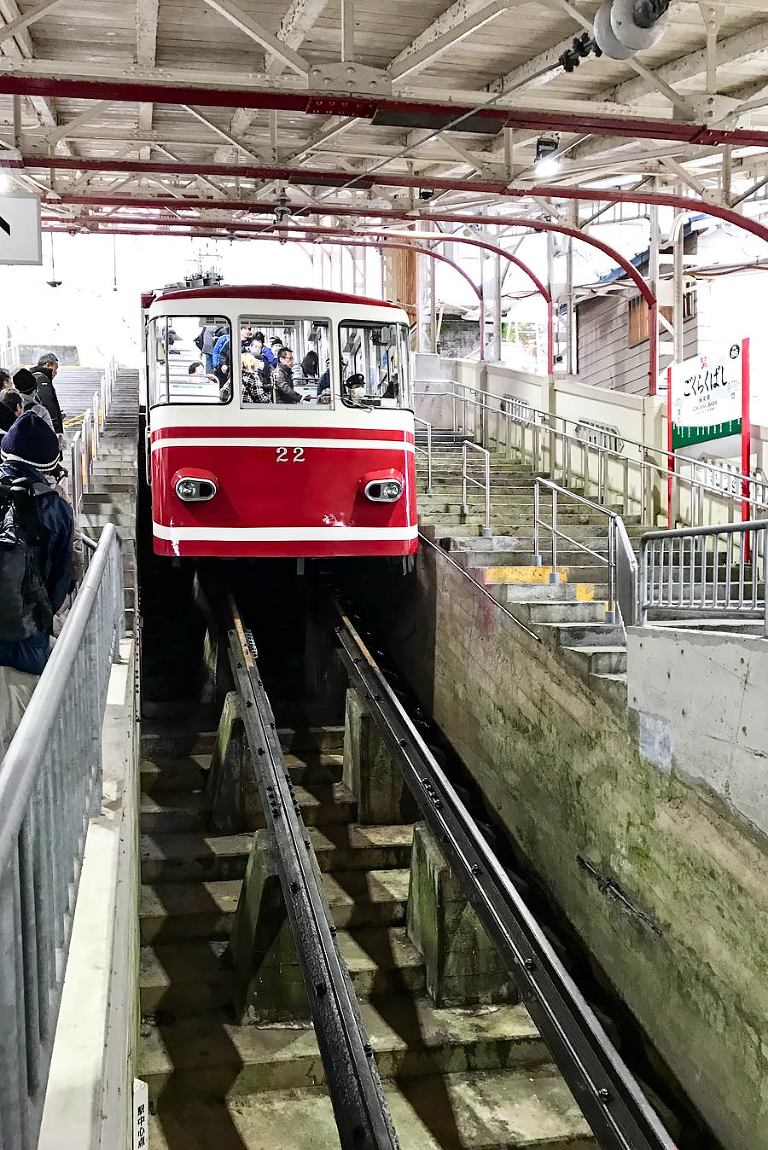 I’m seeing snow on the side of the road. And I’m cold. So incredibly cold. We just arrived in Koyasan (Mount Koya) after a long journey from Osaka to stay at a Buddhist temple. It took a metro, three trains, one steep cable car and a bus to get here and to arrive in a different world. This is a side of Japan we haven’t experienced yet. Quiet, peaceful and with beautiful nature.

And no cell phone reception. Which means that our pocket wifi isn’t working either. By now we’re so used to navigating with Google Maps that we assumed we would find our way from the bus station to the temple using our phones. Guess not.

But Koyasan is a small town, and even though there are 117 temples (a small number compared to the 2000 during the Edo period), we manage to find ‘our temple’ using a simple tiny map in the Lonely Planet and a map on the side of the road. Good to know I can still survive without a phone (sort of).

A young monk welcomes us at the 1200 year old Ekoin temple in perfect English. We leave our shoes at the entrance and go to our room wearing our Japanese indoor slippers.

This is not a hotel or a ryokan (although the room looks similar), but a ‘shukubo’ which means pilgrim lodging at a temple. You get a chance to experience what life at a Buddhist temple is like, while being completely free to participate or not.

You eat and sleep in your own room (on the tatami floor) and share the bathrooms (super clean, because: Japan) with the other guests. Oh, and there’s wifi! 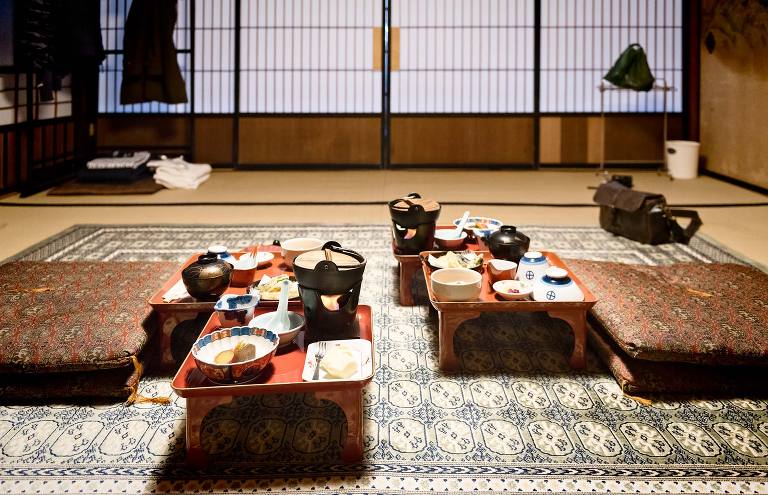 Dinner time starts early at the temple. At 5.30pm they bring a beautifully looking meal to our room. This Buddhist, vegetarian style of eating is called shojin-ryori and I love it. I would love it even more if I was sitting more comfortably (I never know what to do with my legs when I’m eating while sitting on the floor), but it’s all part of the experience. 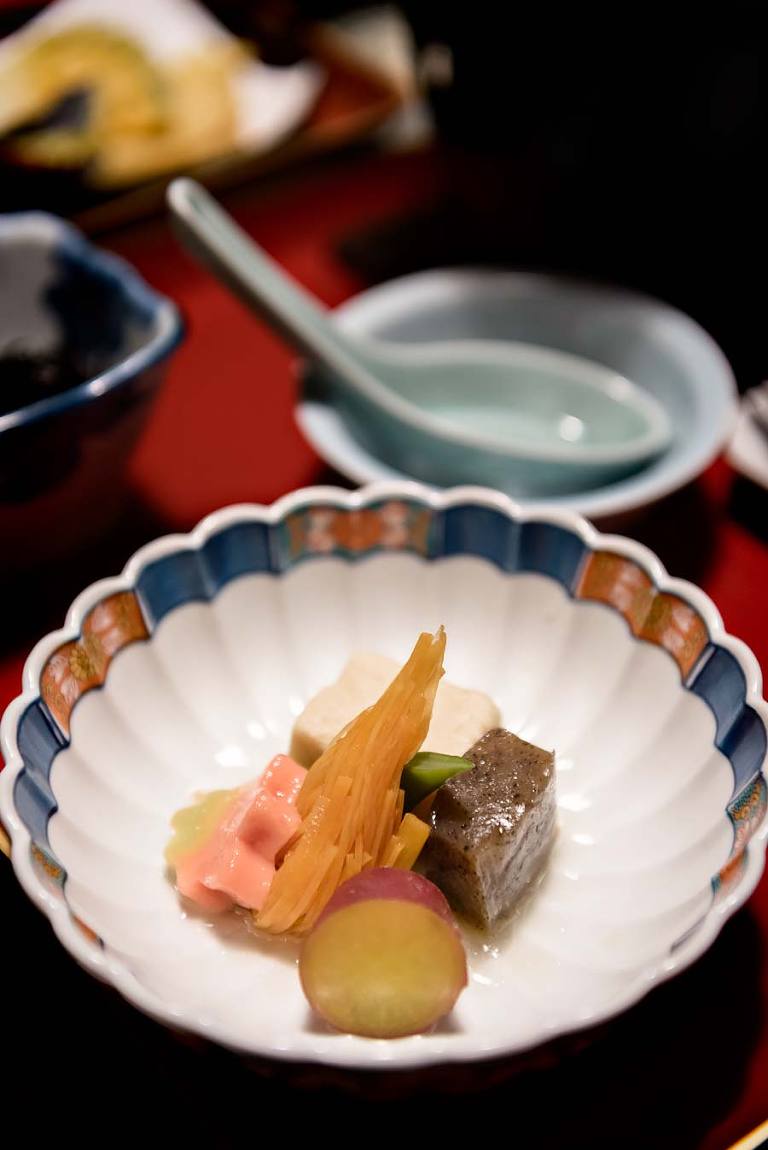 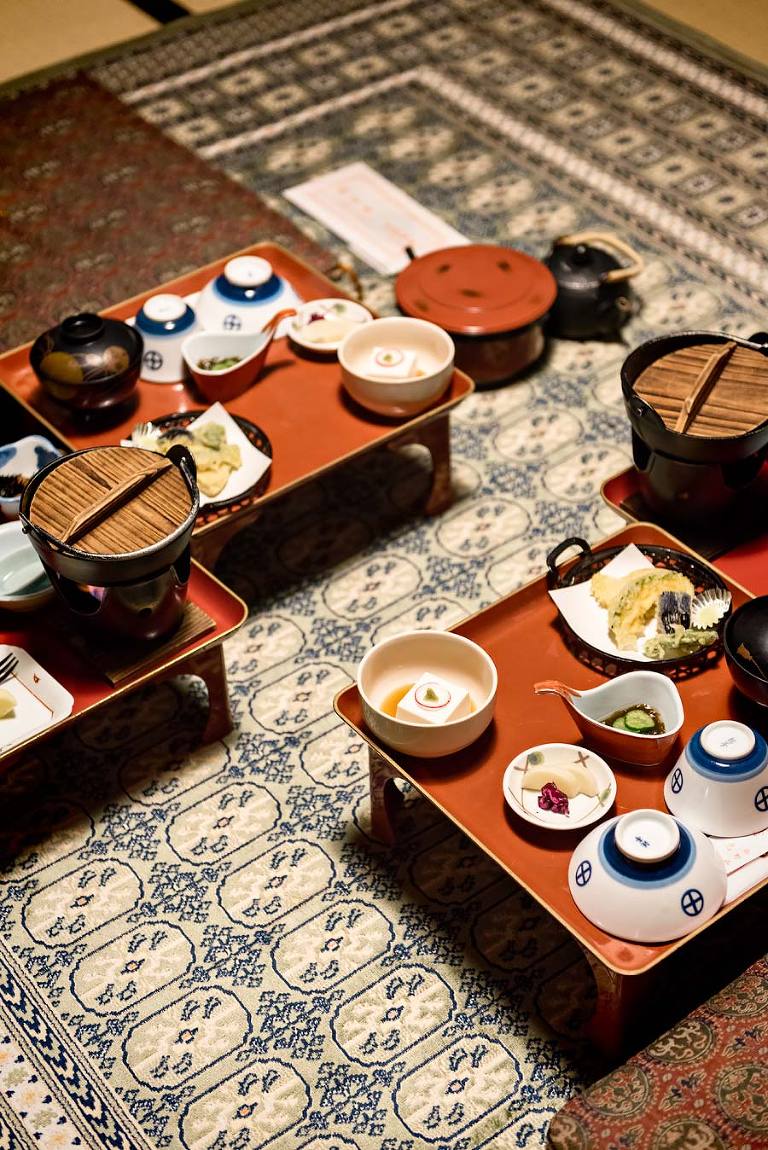 Video: Staying at a Buddhist Temple in Koyasan, Japan 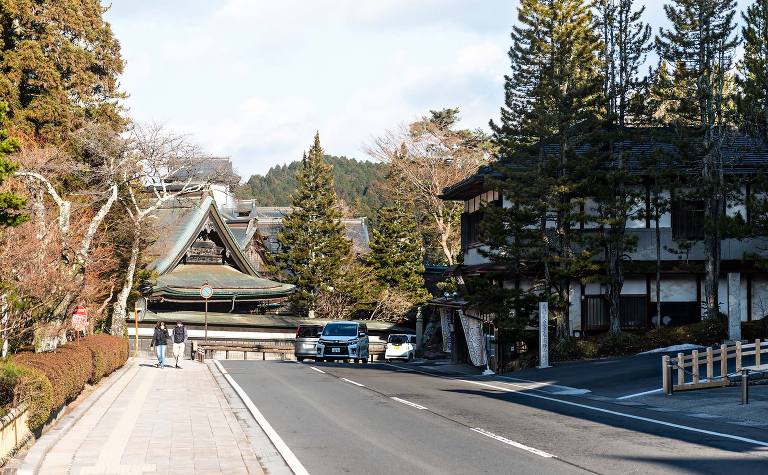 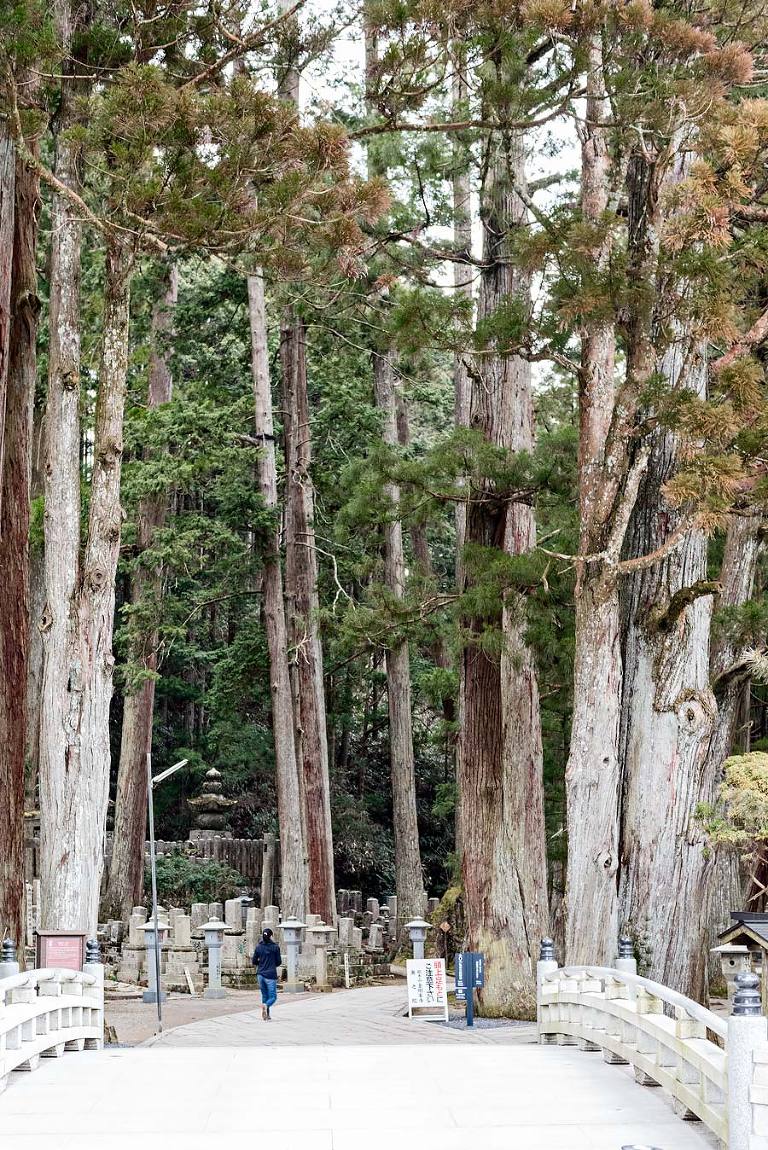 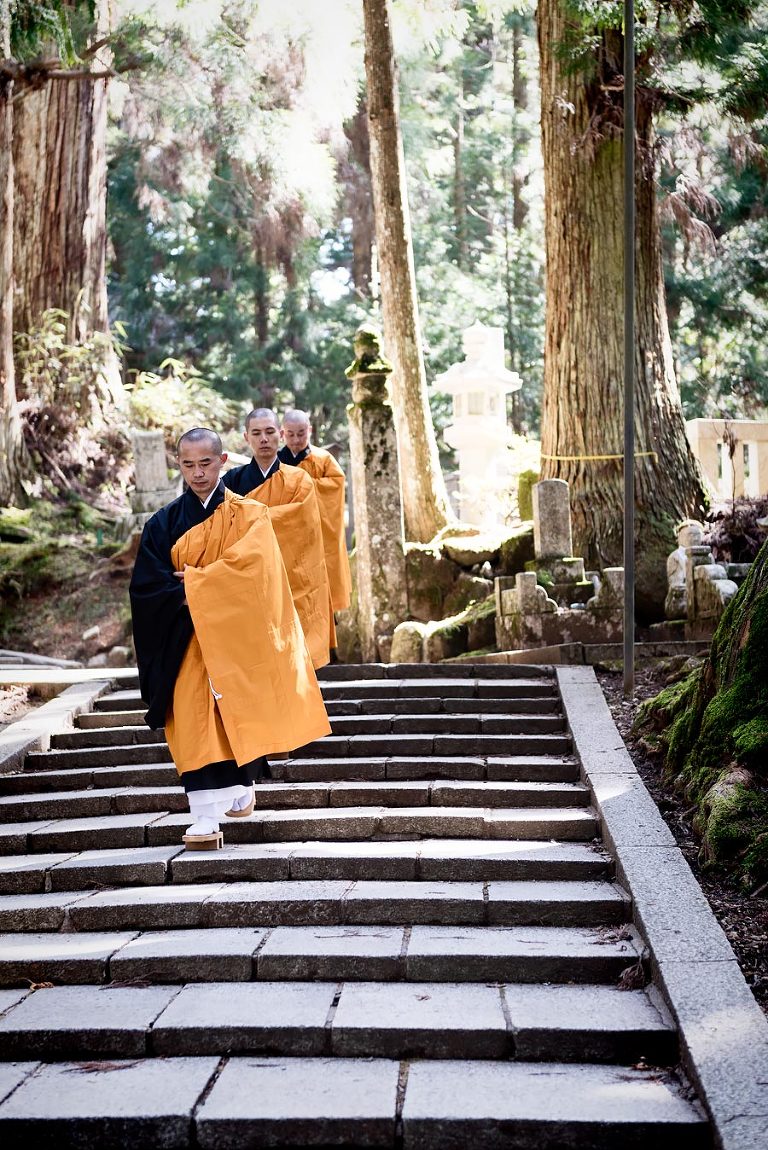 Koyasan is a popular pelgrimage destination for Buddhists. It’s the birthplace of the Shingon school of Buddhism and the grave of its founder – Kobo Daishi – can be found at the Okunoin cemetery.

It’s the largest cemetery in Japan, 2km long with around 200.000 tombs, in a forest with giant and very old cedar trees.

Walking around the cemetery and seeing the many Buddhist statues and interesting gravestones, gates and pagodas is already very special. But the main reason you want to visit the cemetery is Kobo Daishi’s mausoleum and Torodo (Lantern) Hall in front of it. 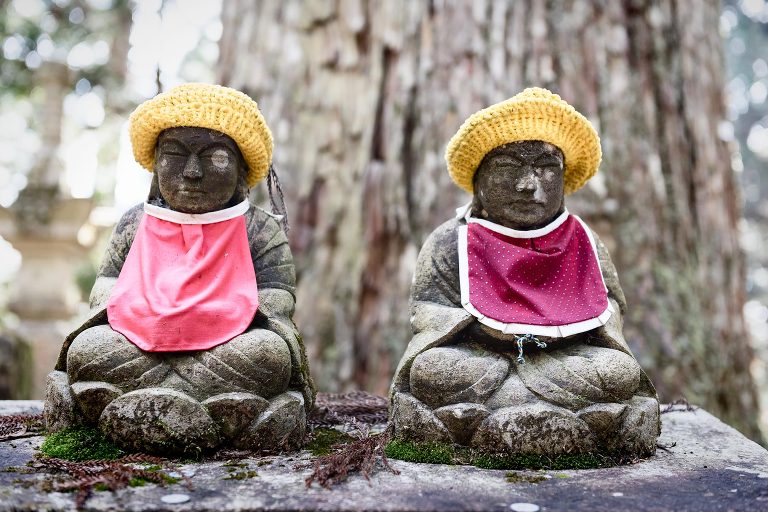 Followers of Shingon Buddhism believe that Kobo Daishi is not really dead. But that he’s meditating (since the year 835), waiting for the future Buddha. Every day, monks bring meals to his mausoleum which can only be opened by the head monk. 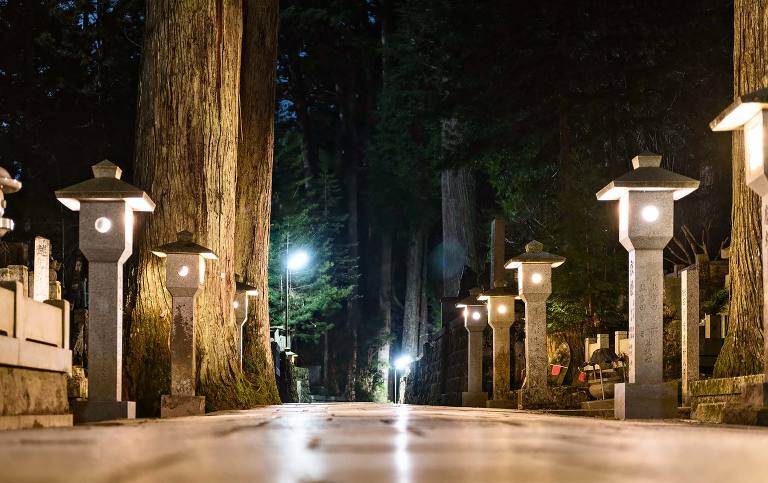 But it’s in the evening that you really want to see the Torodo (Lantern) Hall in front of the mausoleum. Unfortunately (but understandable) you’re not allowed to take any photos at this most sacred part of the cemetery.

We bow to show our respect and cross the Gobyonohashi Bridge when we see thousands of lanterns with this warm, orange light at the Torodo Hall in front of us. It’s magical. And I so wish I had a photo to show it to you. But at the same time I’m glad I could walk around this beautiful, spiritual place and take it all in without thinking about how to best photograph it.

Hot Spring Baths at the Temple

I may be wearing five layers during the night tour (it’s -1ºC), by the time I get back to the temple I’m officially freezing. So there’s only one thing I want right now, and that’s to get in that hot spring bath.

You share the baths with the other guests, but there are separate baths for men and women (you can’t wear any swimwear).

The baths are being heated with water from the mountains and are so hot that at first I don’t think I can go in, but when I finally do it’s so nice and relaxing. I’m ready to sleep now. 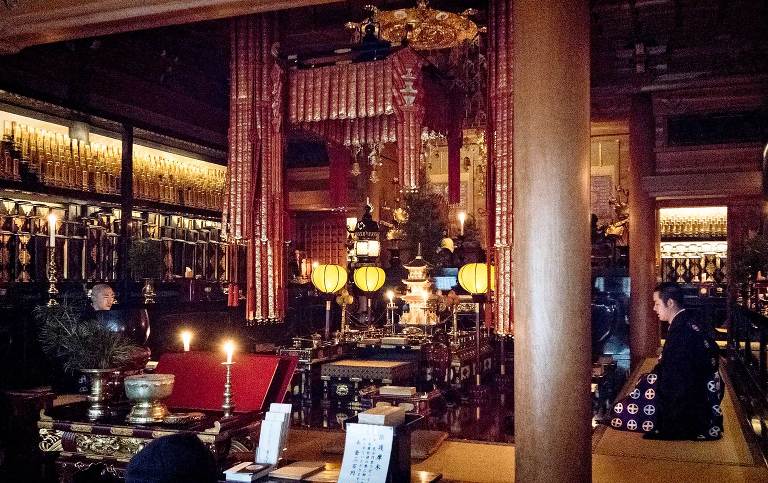 Our room is being heated by a kerosine heater which automatically switches off after three hours. Which means that every three hours – also during the night – you hear ‘Love me Tender’ reminding you to press the button to keep the heater on.

So this kind of gets in the way of getting a really good night’s rest, but other than that I slept really well. 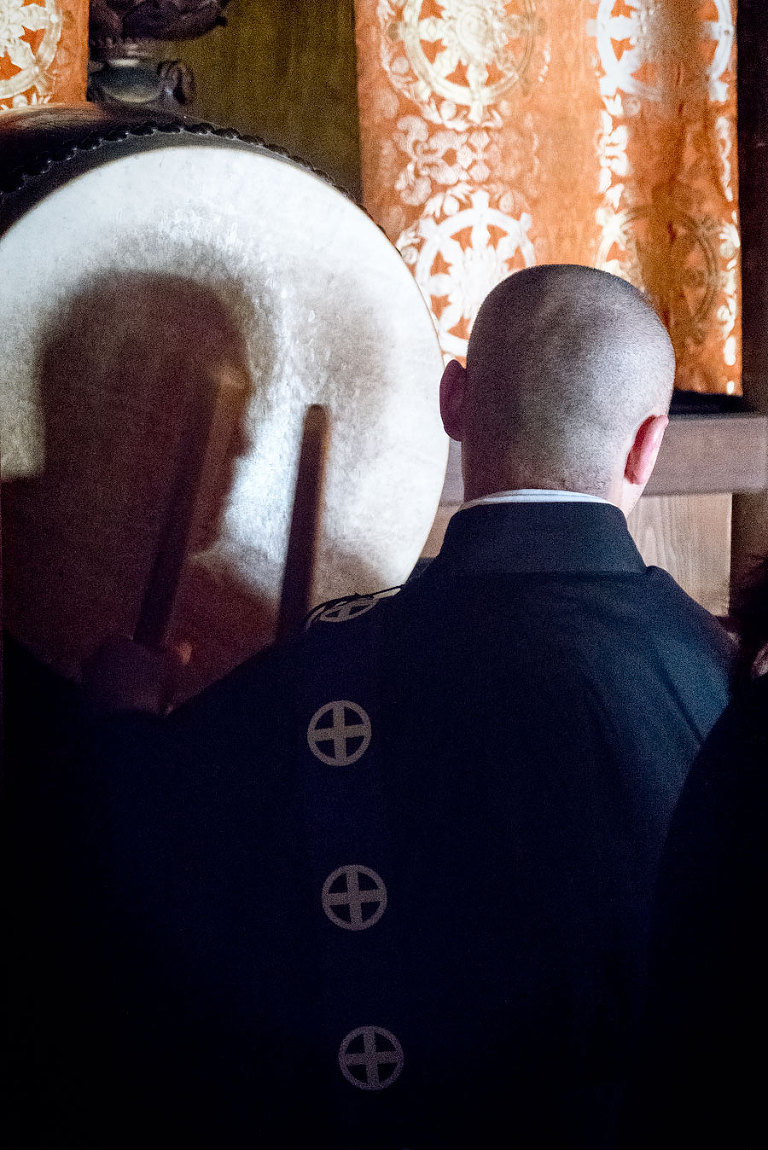 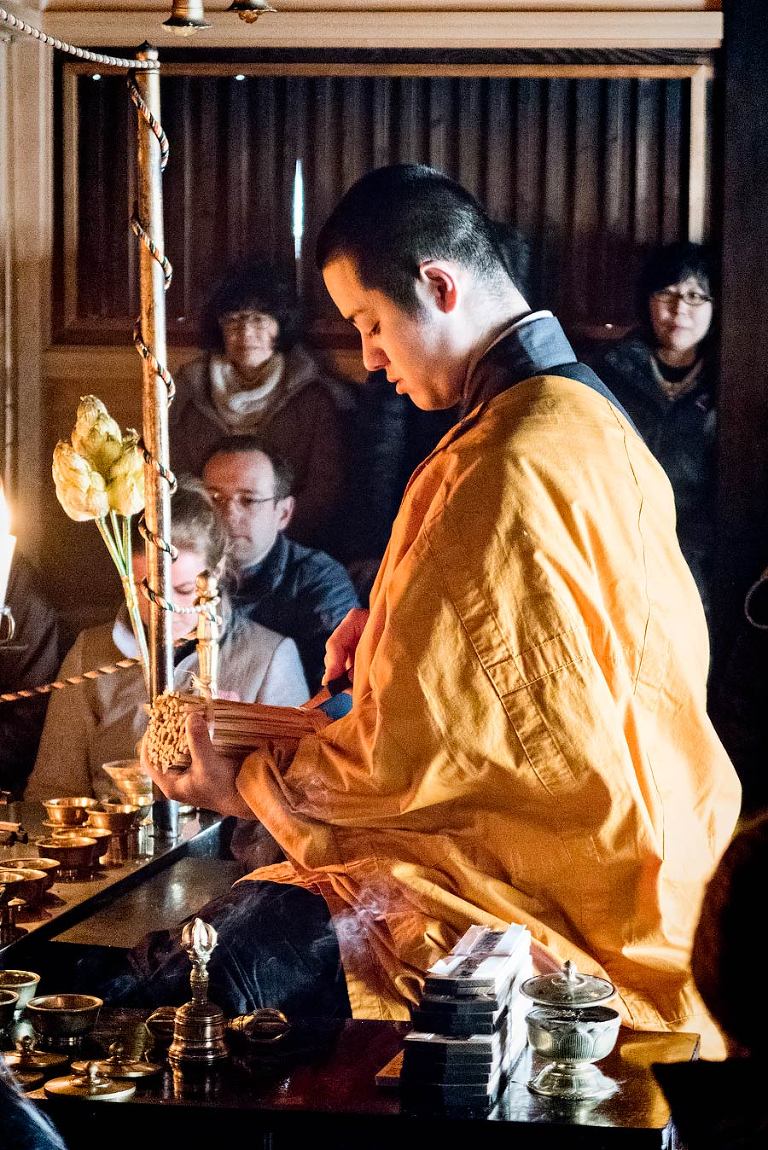 At 7am we all meet at the meditation hall of the Ekoin temple for the morning service followed by the ‘Goma fire ritual’. They say the smoke has healing powers and at the end of the ceremony we’re all being invited to walk to what’s left of the fire and rub some of that smoke on parts of our body that are hurting. 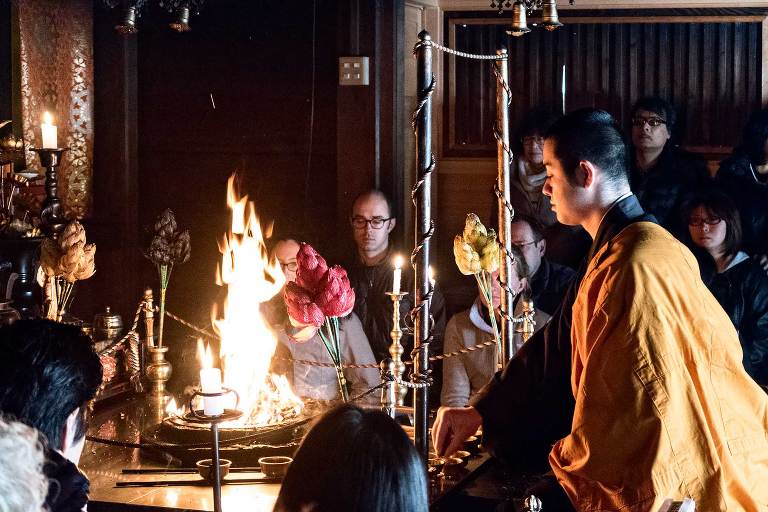 And after this very spiritual way to start the day, breakfast is waiting for us in our room. We finish our Japanese breakfast and decide to make use of that hot spring bath one more time before we have to leave the temple. 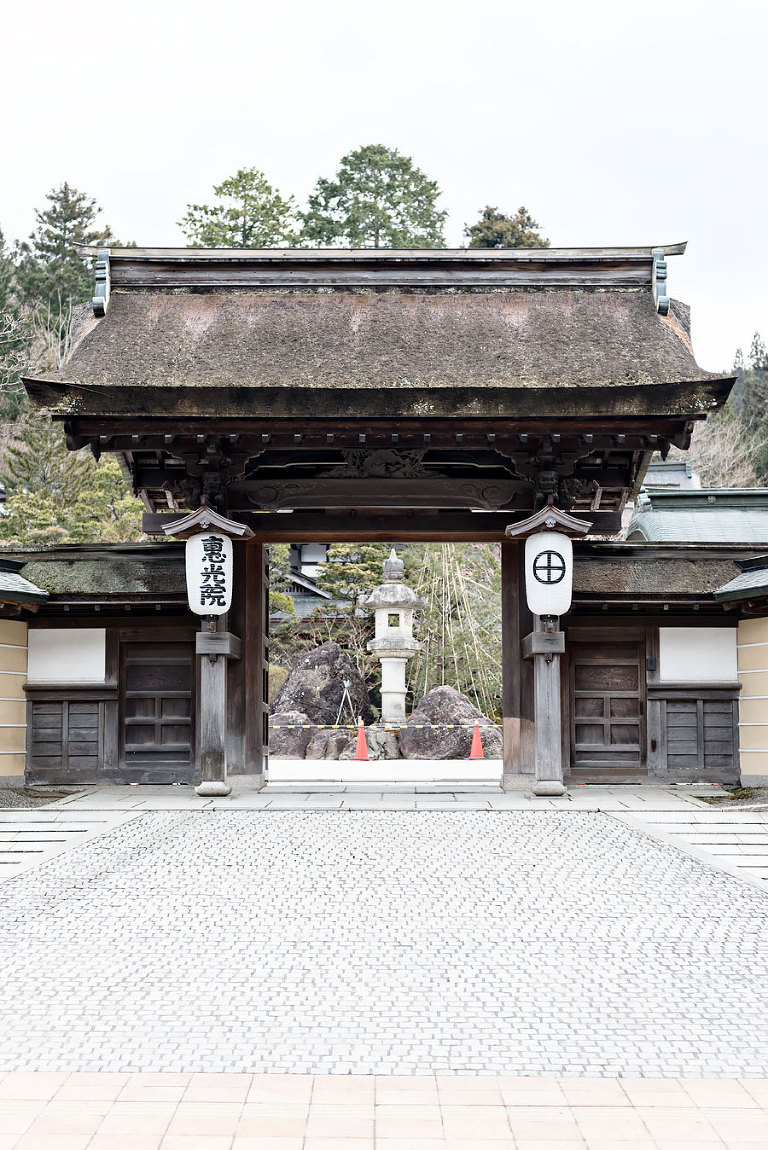 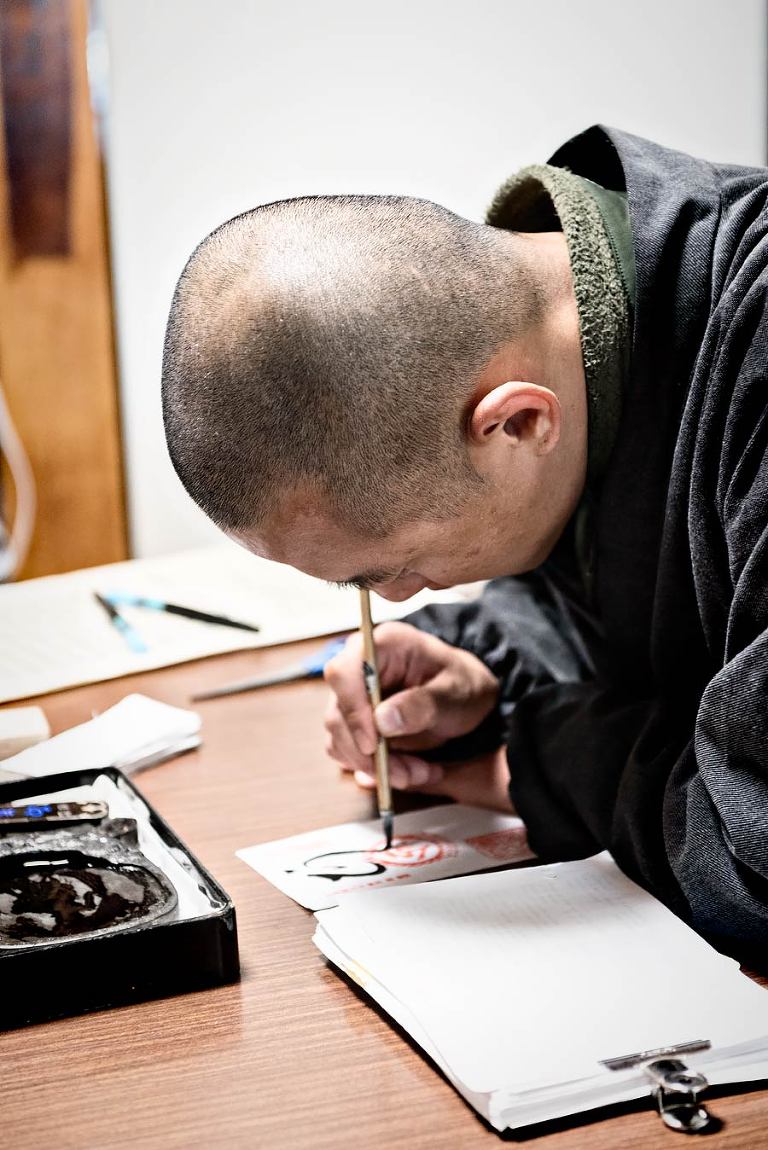 We spend some more time exploring Koyasan, but then it’s time to leave. I’m expecting a little culture shock going back to the city, but at least I’ll have time during the bus, cable car and train rides to slowly prepare myself for city life in Osaka. 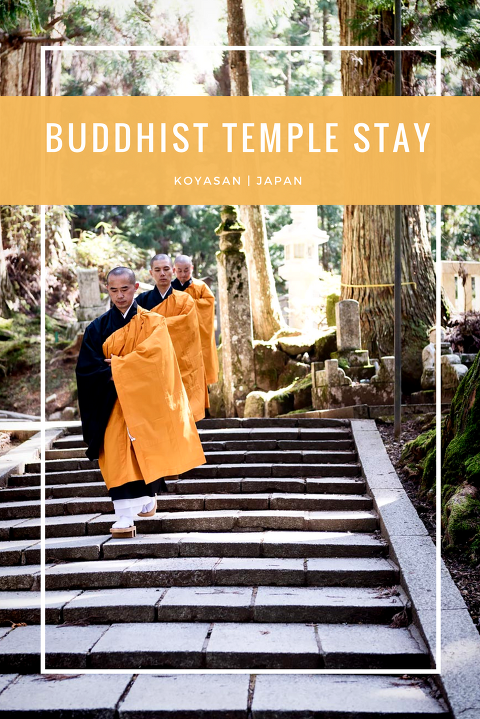 Tags:
« The Great Ocean Road in 1 Day
Photos that will make you want to visit Malaysia’s Food Capital »