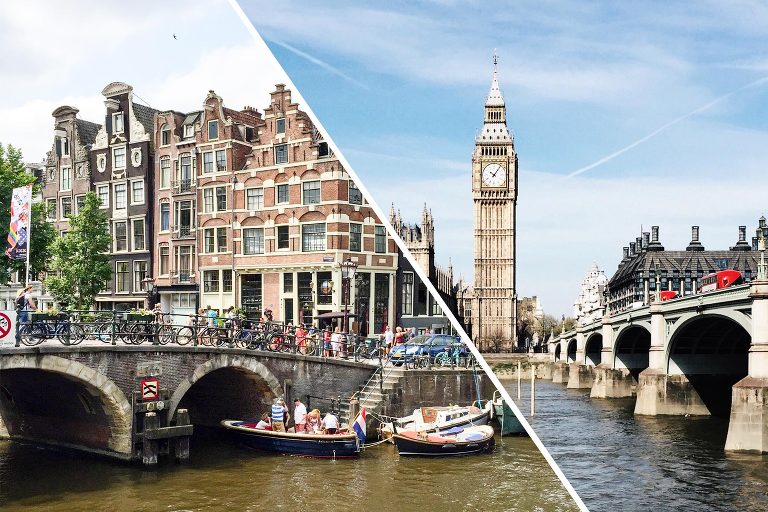 For those of you who wondered if I’m still here… I am. Only ‘here’ is no longer London. I moved back to the Netherlands.

As an expat you’re used to getting questions like ‘When are you coming back?’ or ‘Do you think you’ll ever come back?’. You get them a lot in the first two years and my answer was always the same: ‘Not any time soon’. And at some point the questions stop.

I meant what I said. I absolutely love London. Not loved, but love. It’s one of the most interesting and beautiful cities in the world. And the people I’ve met and the friends I’ve made are simply amazing.

Right, so why am I writing this from my apartment in The Hague and not London?

Why would you ever want to leave?!

Now that I’m back that’s the question I get all the time. Even from my friends and family here. I expected the questions from the people in London. But apparently, whether you’re moving away or moving back, people want to know why.

Which is probably why I’ve been absent on this blog and on social media these past weeks. Knowing I have to at least mention that I no longer live in London. But at the same time having no idea how to explain why I did it.

The Londonist once wrote a story about How to write a “why I’m leaving London” article. It’s a funny story and basically saying that whatever argument people have for leaving the city (the high rent, the commute, …), it’s all nonsense and you’re simply an idiot if you think about leaving.

And that’s why making this decision wasn’t easy. Am I an idiot? (Don’t answer that.) What’s not to love about London? You left the Netherlands for a reason, what if nothing has changed when you go back?

But in the end it comes down to a feeling.

Almost a year ago now, a friend in Amsterdam asked me that old question again. Do you think you’ll ever come back? And I gave her the same old answer: not any time soon. But saying those words felt differently. And I wondered if I actually still meant them.

Yes, there are several reasons why you may consider leaving London. Like paying more than double for a (smaller) apartment. Taking the Northern Line during rush hour is something nobody should have to experience. And – dare I say it – Brexit also didn’t help.

But none of this would have mattered if I thought London was my one and only home. Where I could see myself living for the next coming years. And as much as I did all these years in London, something changed. I missed Holland. And being realistic enough to know that no place will ever be perfect, I wanted to move back.

Still, not an easy decision to make. A little voice in the back of my head kept screaming ‘idiot!’ every time I thought about it. And the mixed messages I got from the few people I discussed it with made me even more confused.

Where are you from?

So when I started planning my sabbatical, I decided to use this time to make a decision. What became clear to me on this trip was that I very much missed my friends in London, but not necessarily the city itself. And when people asked me where I was from, I soon shifted from ‘From the Netherlands, but I live in London’ to simply ‘From the Netherlands’. So I knew what I had to do.

My love for travel has only grown since I moved to London, became friends with other travel addicts and started this blog. I want to travel as much as possible, be in London as often as I can, but with the Netherlands as my home base.

Do I miss London? Of course I do. Still, most of all I miss the people, but I also miss the city. I’m experiencing a bit of a reverse culture shock. Everything is very familiar, but time hasn’t stood still here either. And there are little things I need to get used to again. But it still feels good to be back. And every time I miss the city too much, it’s only a 45 minute flight away.

So this is my version of the ‘Why I’m leaving London’ article. And now that I’ve shared it I can finally start posting all those photos, videos and stories of the countries I visited these past months. And I’m sure there will be some new London stories coming too. It’s almost as if I never left.